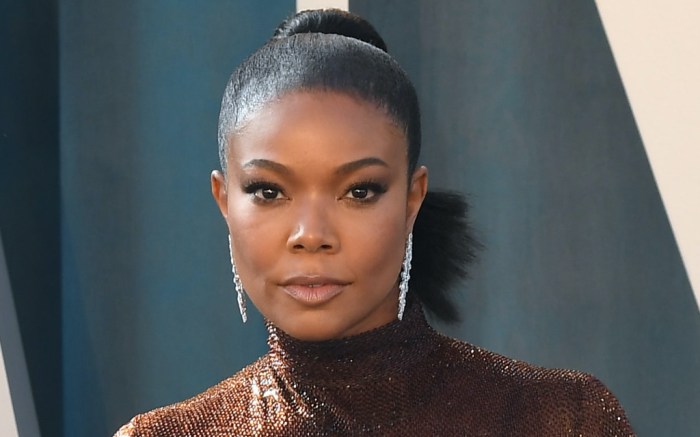 Gabrielle Union busted a move at home with husband Dwyane Wade — which she did in style.

The “Cheaper By the Dozen” actress danced in a monochrome beige outfit by Giuseppe Di Morabito, featuring a trench coat and belted Bermuda shorts with a wide-legged silhouette. Completing the pieces was a slick halter-neck top, which twisted around Union’s bodice to create large front and side cutouts. The sleek look, styled by Thomas Christos, was complete with a thin gold necklace and stud earrings.

“How the night started…” Union shared in the caption, posing with Wade — who was also sharply dressed in a pink Versace suit, white shirt and sneakers, styled by Jason Bolden.

When it came to shoes, Union’s footwear provided a sleek finish — and fashionable throwback — to her look. The “Being Mary Jane” actress wore a slick pair of Rodarte peep-toe wedges, hailing from Kate and Laura Mulleavy’s disco-inspired Fall 2015 collection. The style featured brown leather reptile-embossed uppers, which included slingback straps and side cutouts. Finishing the pair were tan platform soles and thin stiletto heels, connected by a clear lucite wedge, which totaled at least 4 inches in height.

The sky-high footwear was ideal for Union’s date night look, as well as her accompanying dance routine — which she captured in an Instagram Reel with an assist from Wade. The basketball star cheered on Union as she danced to “Top Notch” by City Girls and Five Foreign — that is, until the song paused and he was heard saying “Yeah,” which prompted Union to quickly stand up.

“How The Night Ended. @dwyanewade is a hater. Perhaps if my stance wasn’t so widdddeeee #TopNotch,” Union humorously captioned the clip.

Wedge heels are re-entering shoe rotations this year within the current high heel renaissance. The style connects soles and chunky heels to create a triangular “wedge” silhouette. Seen in numerous footwear styles, the most popular iterations can be spotted in ankle boots and sandals — like new styles by Giuseppe Zanotti, Blowfish Malibu and Marc Fisher. Aside from Union, stars like Kylie Jenner, Anne Hathaway and Nicky Hilton have also worn sharp wedges by Givenchy, Armani and Castaner in recent weeks.