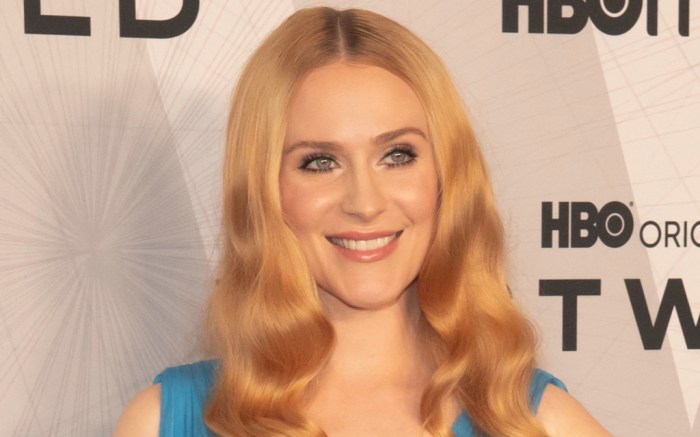 Evan Rachel Wood brought sleek glamour to the red carpet for the fourth season premiere of HBO’s “Westworld.” The actress was joined on the red carpet at New York City’s Lincoln Center by the show’s cast, including Angela Sarafyan and Tessa Thompson, as well as her brother Ira David Wood IV.

For the occasion at Alice Tully Hall, Wood arrived in a flowing light blue gown with a gauzy texture. The sleek number featured a deep neckline, as well as an asymmetric side cutout and daring thigh-high slit. Adding to the piece’s flair were straps that draped behind Wood, creating a cape-like appearance. The “Barefoot” star’s ensemble was complete with a shiny ring and beaded black string bracelet.

When it came to shoes, the “Practical Magic” actress was sharp in a set of strappy sandals. Her style featured thin black soles and three front straps, providing added ankle and toe security. Appearing to feature a satin texture, the pair’s heels weren’t visible — but likely included stiletto heels, given Wood’s penchant for the silhouette.

Heels like Wood’s are a minimalist take on strappy sandals that include thin straps and stiletto heels for a cutout appearance. Styles have been on the rise from a range of brands, including Schutz, Staud and Tom Ford. Aside from Wood, stars including Vanessa Hudgens, Reese Witherspoon and Kylie Jenner have slipped into Le SIlla, Alexandre Birman and Rene Caovilla sandals in recent weeks as well.

She told Ryan Seacrest on the red carpet at the time: “This is my third nomination, and I’ve been to the Globes six times, and I’ve worn a dress every time. And I love dresses: I’m not trying to protest dresses, but I wanted to make sure that young girls and women knew they aren’t a requirement. And that you don’t have to wear one if you don’t want to, and to just be yourself because your worth is more than that.”