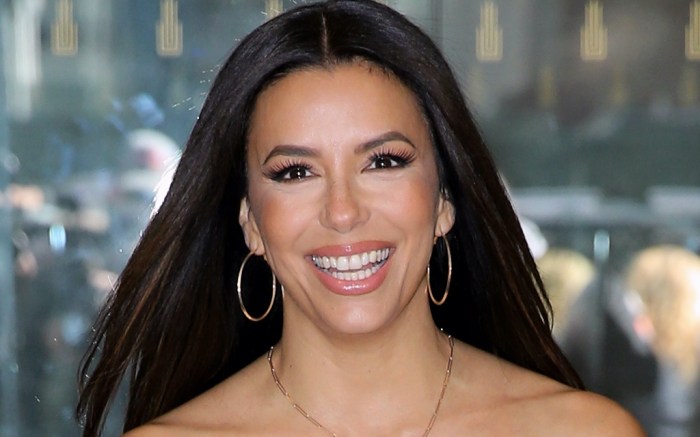 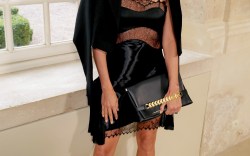 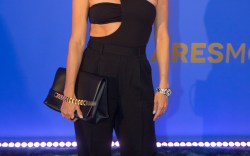 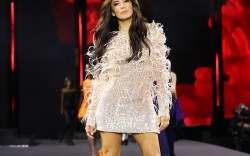 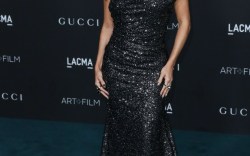 Leave it to Eva Longoria to pull off multiple outfit changes — all in under 24 hours.

The “Desperate Housewives” star arrived to NBC Studios in New York City this morning for an appearance on “The Today Show,” wearing a bright orange suit. The matching set featured wide-legged pleated pants and a sharp blazer, layered over an orange and white tweed top. Completing Longoria’s look was a Mckenzie Liautaud gold and rock crystal toggle necklace, thin hoop earrings and a pair of pink suede platform heels that were mostly covered by her pants.

While leaving the studio, Longoria stepped out in a second bold look: a tan and lavender set with an allover plaid print. The star’s outfit featured an off-the-shoulder top with a structured bodice, as well as pleated high-waisted trousers. The set also included a sharp-lapeled blazer, which Longoria removed but wore on-camera. Complementing her look was a set of beige pumps, featuring pointed toes and suede uppers with stiletto heels. The streamlined look was complete with her same gold jewelry — plus a watch and chain bracelet.

While on the show, Longoria discussed her new “Connections” podcast with Hoda Kotb and Jenna Bush Hager, which includes conversations with experts ranging from finances to family and more. The actress also chatted about motherhood, her new Allergen partnership and celebrating her birthday with Marc Anthony. She even kicked off her heels for a game of “Charading Places” with Jenna and Hoda, decreasing her height and showcasing her full 5-foot-2 frame.

You can view her full appearance below:

However, these weren’t Longoria’s only bold looks within the last 24 hours. Prior to arriving, the star broke a sweat on Sunday in an emerald green sports bra and matching leggings, each featuring a metallic sheen — as shared on her Instagram. The bold look, worn for a daytime workout, were paired with blue, gray and white New Balance sneakers that included knit uppers, a lace-up silhouette and rounded toes.

“Showing up for yourself is the first step,” Longoria captioned the photo.

Discover Longoria’s boldest looks over the years in the gallery.