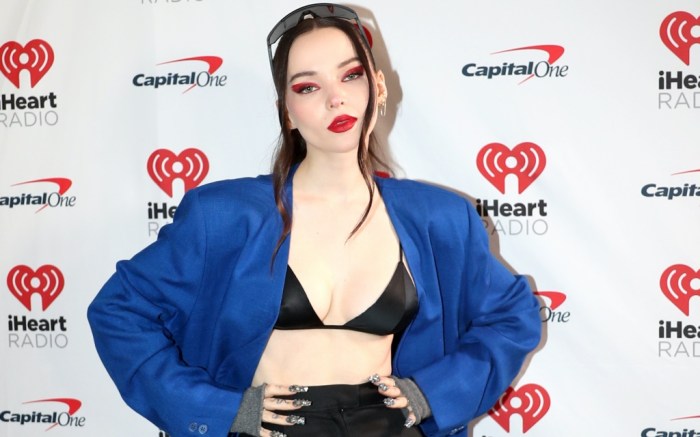 Dove Cameron took grunge style to soaring heights to perform at the iHeart Radio Jingle Ball in Boston this week.

On Sunday night, the former “Liv and Maddy” star arrived at TD Garden in a dynamic two-toned outfit. Her ensemble prominently featured a set of black wide-leg trousers, paired with a matching satin bra. Layered atop the set was an oversized cobalt blue blazer, giving Cameron’s dark neutrals a pop of color. Her outfit was complete with gray knit arm cuffs and a set of rimless sunglasses.

When it came to shoes, Cameron gave her outfit a staggering height boost with gothic black platform boots. The “Boyfriend” singer’s footwear featured glossy patent uppers with rounded toes and thick tiered platform soles, covered in a stitched pattern that mimicked a cut-and-sew effect. Though the soles were interconnected, her style’s heels appeared to total 6 inches in height to give Cameron a sky-high edge.

PHOTOS: Discover Dove Cameron and more celebrities at the MTV Video Music Awards in the gallery.