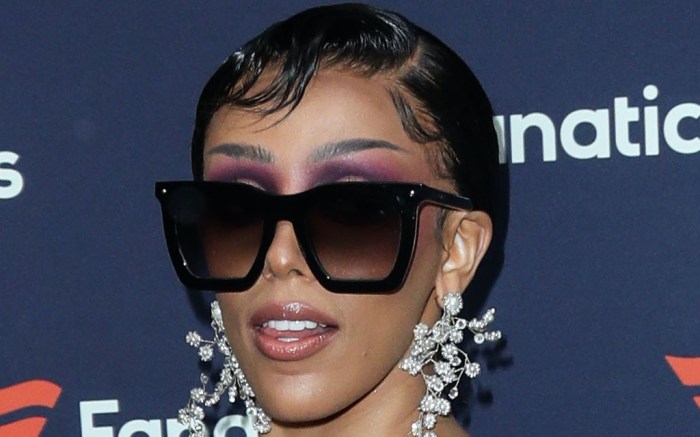 The “Woman” singer posed on the red carpet in a daring ensemble, featuring black lingerie. The lacy bra and panties were layered beneath a white mesh dress studded in sparkling crystals. For added drama, the musician completed her look with a black feather-covered jacket, sheer thigh-high socks, oversized sunglasses and large crystal statement earrings.

For footwear, the “Get into It” singer wore a pair of towering platform boots. The star’s pair featured black leather uppers, as well as thick platform soles. Her pair was complete with chunky block heels, which appeared to total between 4-5 inches in height. The style boosted her look with added height, while creating a streamlined silhouette when paired with her stockings and lingerie.


Boots like Doja Cat’s have been on the rise this season, due to their whimsical chunky silhouettes and comfort. Support often comes from their thick soles and heels, making pairs easier to move in than their stiletto counterparts. Aside from the “Kiss Me More” singer, stars like Olivia Wilde, Olivia Rodrigo and Nicola Peltz have worn similarly chunky boots by Khaite, GCDS and Versace in recent weeks.

When it comes to shoes, there’s seemingly no style or height that Doja Cat hasn’t worn. The singer often coordinates her footwear with her avant-garde outfits, wearing platform sandals by Christian Louboutin, D’Accori, Le Silla and other top brands on the red carpet. When off-duty, she can be spotted in Naked Wolfe’s chunky sneakers, as well as Bottega Veneta sandals. The star has also dipped her toes into the world of collaborations, having released two fashion collections with PrettyLittleThing.

Click through the gallery to see Doja Cat’s most daring looks over the years.