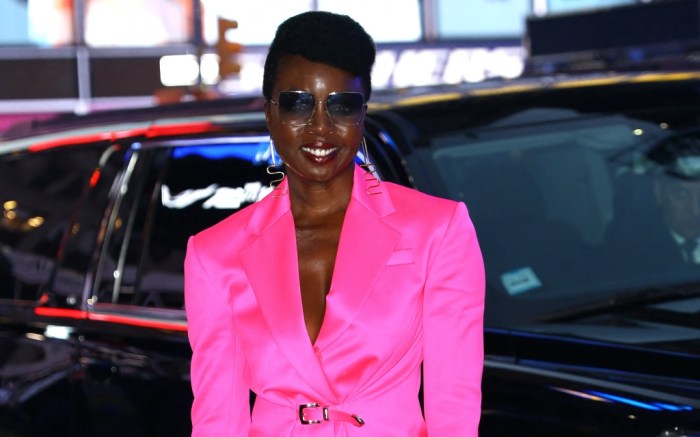 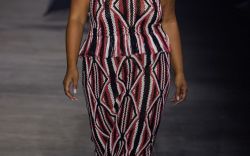 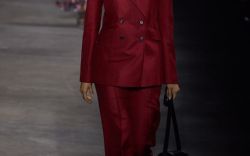 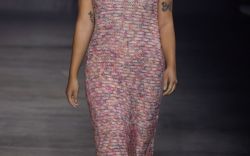 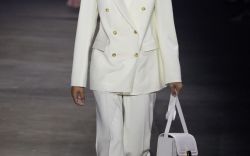 The “Black Panther” actress arrived for an appearance on “Good Morning America” on Monday morning, wearing a vibrant two-toned suit. Her silky ensemble featured a bright pink blazer with pointed lapels and a cinched buckled center, paired with striped pink and red trousers. Her ensemble was finished with twisted gold drop earrings and a set of oversized ombre sunglasses.

When it came to footwear, Gurira’s ensemble appeared to be complete with a set of metallic gold footwear — a slip of which could be seen beneath the hem of her trousers. The shiny pair likely took the form of a heeled sandal or pump, two of the popular silhouettes she’s worn on past red carpets.

Though her shoes were not visible, Gurira did add to her outfit’s statement-making abilities with a white leather handbag by Gabriela Hearst. The accordion-style Diana, which featured a top handle and rose gold hardware, can be made to order from Hearst’s website.

Gurira’s footwear often includes pops of color and sleek neutrals, thanks to her work with stylist Thomas Carter Phillips. The star’s ensembles often include heeled sandals or pointed-toe pumps on the red carpet, hailing from top brands including Christian Louboutin, Roger Vivier, Fendi and Manolo Blahnik. The “Walking Dead” actress can be spotted in the front rows for brands including Alexander McQueen, Thom Browne, Tom Ford and Salvatore Ferragamo as well during Fashion Month.