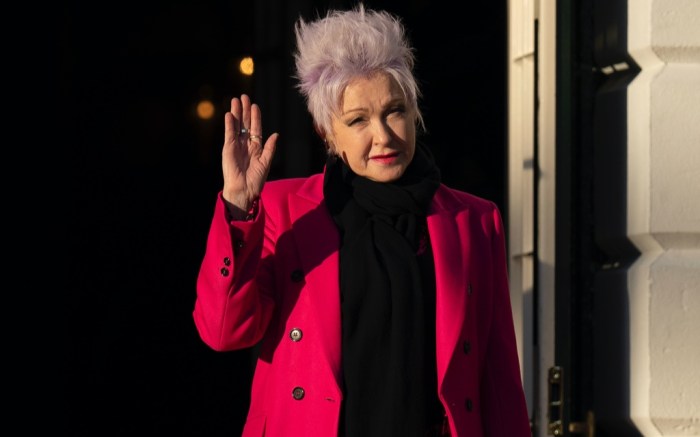 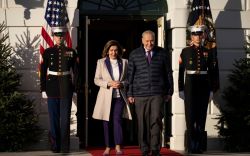 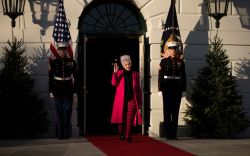 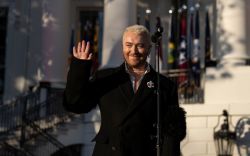 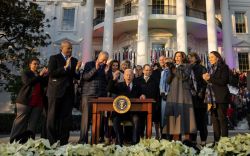 Cyndi Lauper brought bold style to the signing of the Respect for Marriage Act this week. The Act, which requires all 50 U.S. states to recognize all marriages — regardless of race, gender or sexual orientation — and provide same-sex couples with federal benefits, was signed by President Joe Biden in Washington, D.C. on Tuesday.

During the occasion, Lauper attended the Act’s signing — and performed her song “True Colors” — at the White House in a bright red coat. The Grammy Award-winning musician’s sharp outerwear was paired with a matching set of pleated trousers, featuring an allover black houndstooth print. A black turtleneck sweater and red crystal drop earrings completed her ensemble.

As for footwear, Lauper grounded her outfit with a versatile pair of leather boots. Her black style featured monochrome uppers with rounded toes, as well as thick heels totaling 2 to 3 inches in height. The set provided a warm, sharp base for her ensemble for the occasion, while remaining easy to walk in throughout the day.

Prior to the Act’s signing, the musician also spoke at a White House press conference in a black sequined shirt and blazer, paired with dark crystal-studded drop earrings. The “Girls Just Want To Have Fun” singer’s appearance at the event held special meaning, as she has advocated for LGBTQIA+ rights for much of her career; Lauper also founded her nonprofit True Colors Fund in 2008 to increase LGBTQIA+ education and end homelessness for its youth.

When it comes to footwear, Lauper’s shoe style is often versatile and sharp. On the red carpet, the Tony Award-winning musician can be seen in platform-heeled pumps, boots and sandals in an array of metallic and neutral hues. She’s also attended New York Fashion Week shows for brands including Libertine and Betsey Johnson over the years. As previously mentioned, Lauper is a notable LGBTQIA+ advocate; she even launched a shoe collection with M4D3 that supported LGBTQIA+ youth in 2015.