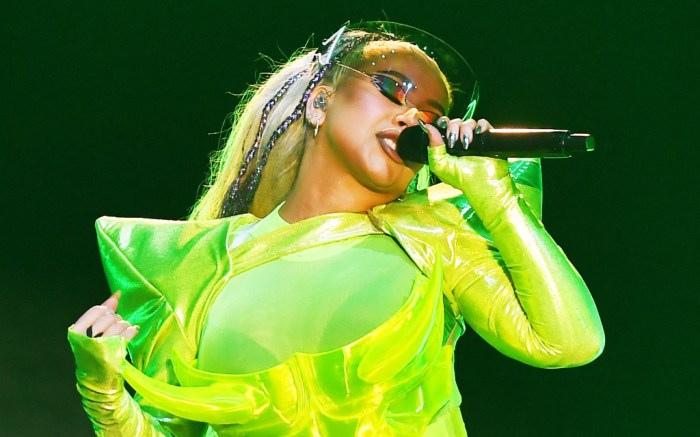 Hitting the stage in Preston Park, the “Burlesque” star performed in a neon green bodysuit with a sheer bottom layer, exaggerated triangular shoulders and built-in fingerless gloves. Completing the costume was a sculpted front plate that included rounded horns protruding from its bodice. Aguilera’s outfit was finished with a clear visor and long crystal hairpiece.

Completing Aguilera’s ensemble were fishnet tights layered beneath black thigh-high boots. Her patent leather style featured a glossy finish. Though they weren’t fully visible in photos, the style likely included pointed toes and 3-4-inch heels based on her lieu of performance outfits over the years.

However, this wasn’t Aguilera’s only bold costume — or boots — worn at Brighton Pride. The Grammy Award-winning singer also emerged during her set in a black leather number that included a latex corset, rounded sculpted bodice and numerous crystal embellishments shaped like flames. Briefly, a flame-printed latex coat completed her outfit. She also finished the ensemble with matching boots, which included block heels and flame prints on their backs — creating a matching head-to-toe ensemble.

On the footwear front, the “Genie in a Bottle” singer is no stranger to a bold set of shoes. Aguilera favors boots, sandals and pumps with at least 4-inch heels by Gianvito Rossi, Amina Muaddi and Balenciaga for appearances over the years. She also has a penchant for giving her outfits a sporty boost with thigh-high boots, sandals and chunky sneakers by Yeezy, Nike and Gina Shoes when off-duty. Aguilera notably has a collection of Christian Louboutin pumps in her boudoir-themed closet as well, serving as a muse to the French footwear designer.

PHOTOS: Click through the gallery for even more of Christina Aguilera’s best and boldest looks over the years.