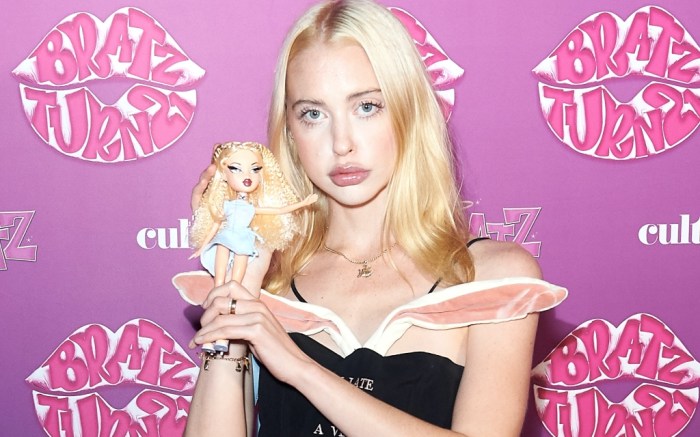 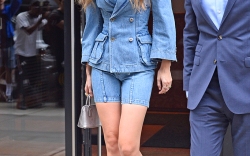 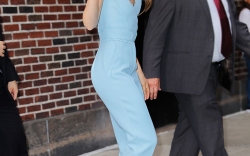 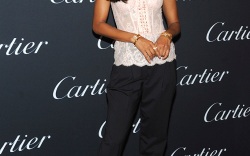 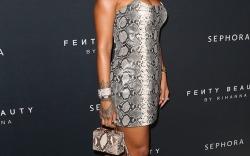 Chloe Cherry stepped out in Bratz-worthy style for a party celebrating the doll line’s collaboration with fashion-favorite brand Cult Gaia — as well as its 21st anniversary. The event, held in Beverly Hills, was co-hosted by Cult Gaia and socialite Stassie Karanikolaou.

Her outfit was complete with a gold charm bracelet and pendant necklace, as well as a pale blue gift box-shaped clutch; the bag, additionally from Moschino’s 1995 line, was originally modeled after Tiffany & Co.’s iconic boxes.

When it came to footwear, Cherry kept her outfit’s base simple with a set of black pumps. Her pointed-toe style included triangular toes and slanted uppers, crafted from glossy patent leather. Though Cherry’s footwear’s heels were not visible, it’s likely they featured 4-5-inch stiletto heels; the silhouette is a traditional base for the style, which adds a sharp finish to nearly any ensemble.

For footwear, Cherry appears to keep her selections versatile. During recent outings, the star has been spotted in black, sparkly, or single-toned sandals with block or stiletto heels from brands like Nodaleto. When off-duty, she mostly wears low-top sneakers by Nike and Converse. Cherry’s become a rising star in the fashion world this year, modeling in shows for Blumarine and GCDS — plus LaQuan Smith’s Fall 2022 show during New York Fashion Week.