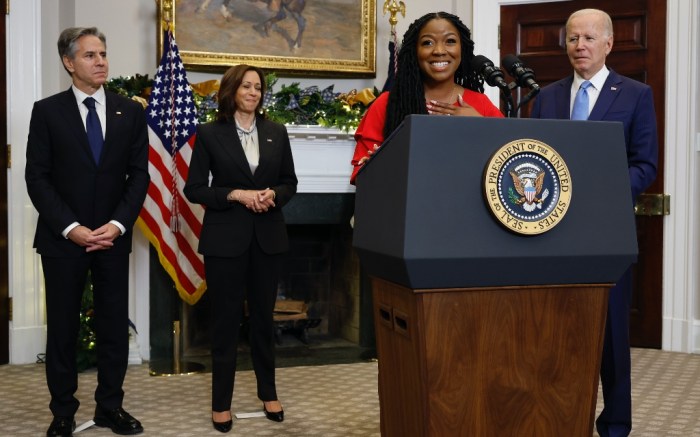 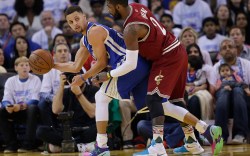 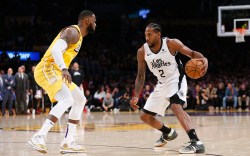 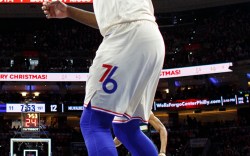 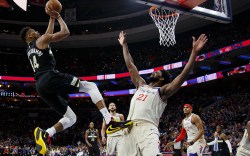 Cherelle Griner gave a speech during the release of her wife, WNBA star Britteny Griner — who was arrested in Russia on drug charges in February — is currently en route back to the United States after a prisoner trade, according to a viral Tweet from President Joe Biden.

Griner met with President Biden, Vice President Kamala Harris and Secretary of State Anthony Blinken at the White House in Washington, D.C., for the occasion on Thursday morning, wearing a celebratory red dress. Her bright ensemble featured a knee-length skirt and gathered elbow-length sleeves. Griner finished her outfit with a delicate pendant necklace and two thin nose rings, seen while she gave a speech in the building’s Roosevelt Room.

When it came to footwear, Griner slipped on a pair of pointed-toe pumps. Her style featured dark black satin uppers, which included curved counters and triangular toes in an asymmetric d’Orsay silhouette. Thin stiletto heels, likely totaling 3-4 inches in height, finished the set with a height-boosting base.

WNBA All-Star athlete Brittney Griner was released from Russia back to the United States on Dec. 8, 2022. Previously, Griner was detained by Russian authorities on drug charges in February for carrying vape cartridges in her luggage at the Sheremetyevo International Airport. Griner claimed it was prescribed medication. Griner’s trial in Russia began on July 1 — over 130 days after her detainment, and following the U.S. government’s sanctions against Russia for its attacks on Ukraine near the time of her arrest — and originally led to a 9-year-long sentence in a penal colony in Mordovia.

Griner’s release was made through a prisoner trade for convicted Russian arms dealer Viktor Bout.

PHOTOS: Discover the NBA’s top Christmas Day shoe moments over the years in the gallery.