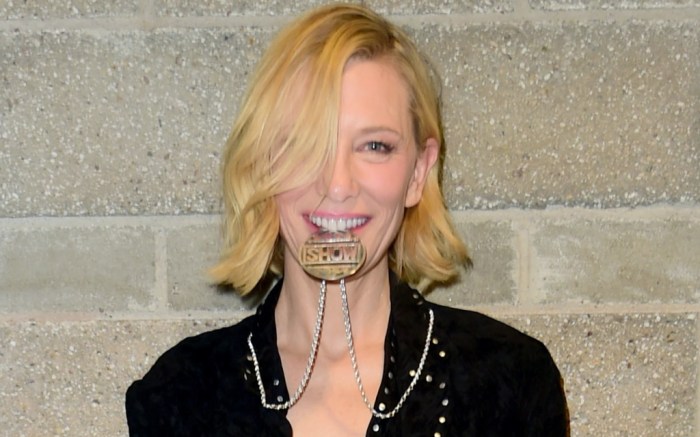 Cate Blanchett accepted the Silver Medallion Award in truly humorous fashion — with sharp style, to boot — at the 2022 Telluride Film Festival. Alongside Blanchett, Mark Cousins and Sarah Polley also received Awards for their contributions to cinema.

The “Tár” star posed after receiving her silver medal with the necklace itself hanging on a chain, which Blanchett held in her mouth. However, the accessory wasn’t out of place within her edgy equestrian-esque outfit: a set of black leather pants and low-cut button-up blouse. Completing her outfit was a black suede blazer, featuring pointed lapels and side pockets lined with round silver studs for a grungy, bohemian finish.

When it came to shoes, Blanchett opted for a sharp pair of black leather boots, which featured a calf-high silhouette. The streamlining pair was complete with 3-4-inch block heels, adding a height boost to her outfit. Along with Blanchett’s pants, her boots were the same style she wore the day before at the Venice Film Festival in Italy, also with a sleek take on suiting: a striped brown blazer, V-neck T-shirt and layered gold pendant necklaces.

The 2022 Telluride Film Festival, held in Telluride, Colorado, previews upcoming films and celebrates the accomplishments of the cinema industry. Running from September 2 to 5, the event features an array of film screenings and panel discussions; this year’s event includes “Bones and All,” “Lady Chatterley’s Lover,” “Women Talking” and “Bardo.” The festival also honors a group of artists each year for their cinematic contributions with the Silver Medallion Awards, whose 2022 recipients are Cate Blanchett, Mark Cousins and Sarah Polley.