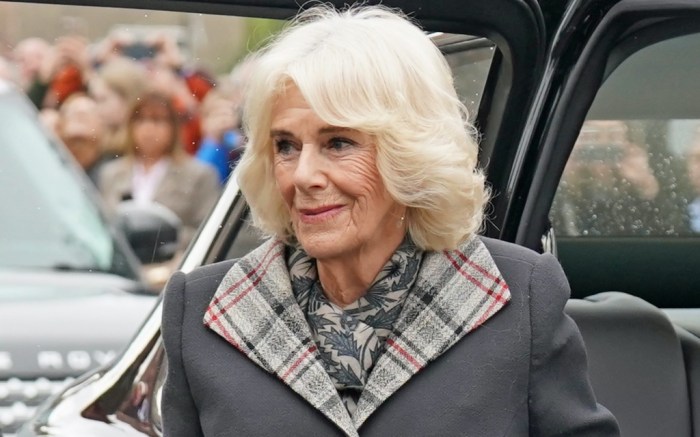 While greeting the Aberdeenshire community in Ballater with King Charles III for their support following the death of Queen Elizabeth II, the new queen attended a reception at Station Square in a short gray wool jacket with a red, black and light gray plaid lining. Featuring pointed lapels, the piece was paired with a coordinating plaid knee-length skirt and matte black tights. Finishing the royal’s ensemble was a gray leaf-printed scarf, blue gloves and small drop earrings.

When it came to footwear, Camilla opted for pumps from one of her go-to brands, Sole Bliss. Her $249 Sydney style featured black suede uppers with 1.25-inch block heels and pointed toes. Her style also included cushioned soles, bunion beds and a soft leather lining for additional comfort.

Sole Bliss has been a popular brand for Camilla over the years due to its range of low-heeled pumps in black, navy and nude hues; in fact, she owns at least 11 pairs in her wardrobe. The British label is known for its comfort-focused cushioned styles, which include leather-lined uppers and elastic stretch panels designed to combat joint pain — making them comfortable for anyone to wear throughout the day. The queen is estimated to have worn the label’s Valencia pump at least 80 times, according to a brand statement; she also frequently wears its pointed-toe Kitty pumps, as well.