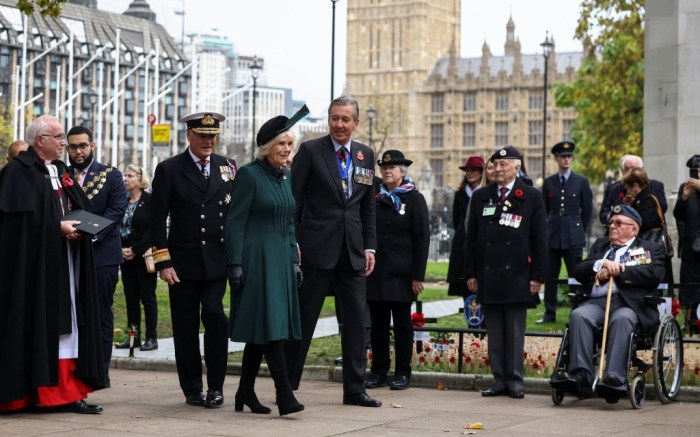 Queen Consort Camilla brought a formal take to winter style while honoring the Year of the Field Of Remembrance in London.

Arriving with King Charles III at Westminster Abbey for the 94th occasion, Camilla wore a deep forest reel wool coat. Her long-sleeved zip-up style included thin black piping across its bodice and sleeves, as well as a flared base. Complementing her attire was a matching green, black and red scarf, as well as a black fascinator and leather gloves. A thin gold bracelet, red poppy pin and sparkling diamond brooch completed her ensemble.

When it came to footwear, Camilla slipped on a pair of black suede boots. Her close-toed set featured tall uppers — appearing to either be a knee-high or over-the-knee silhouette — with a stretchy texture, allowing for greater movement throughout the day. Block heels totaling at least 2 inches in height finished the set, providing it with a practical height boost that was ideal for navigating the outdoor terrain.

The Field of Remembrance is an annual memorial organized by the Poppy Factory in Westminster, held for a full week on the Thursday before Remembrance Sunday until the following Thursday. The garden, set on the lawn of St. Margaret’s Church, includes 250 plots for armed service associations, which participants in the occasion can buy a wooden remembrance token for — marked with the name of an armed forces member who died while serving. Funds raised from the occasion, which has been annually held since 1928, are traditionally donated to the Royal British Legion by the Poppy Factory.