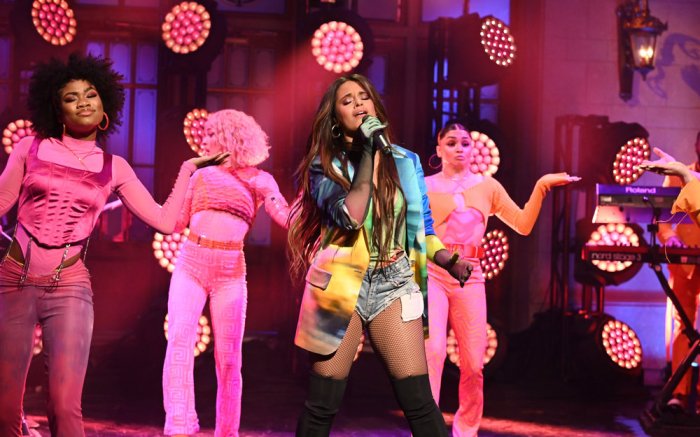 The former Fifth Harmony member began her set with her song “Bam Bam” off of her new album “Familia.” For the occasion, Rob Zangardi and Mariel Haenn styled the musician in a pair of denim hot pants with exposed pockets. The blue short shorts, layered over black fishnet tights, were paired with a multicolored watercolor-printed Dries van Noten blazer, as well as a matching top with built-in gloves.

Cabello’s ensemble was finished with sculptural silver chokers and earrings by Jennifer Fisher, as well as thigh-high stretchy black boots. The versatile pair gave her look fuller coverage, while also including a sleek edge from short stiletto heels.

You can watch her performance, below:

For her second musical set of “Psychofreak” with Willow Smith — which she also released the edgy music video for this weekend — Cabello leaned into her edgy side in a glossy black leather outfit. The monochrome ensemble included leggings, as well as a sculpted top with wide straps curving in rounded shapes around Cabello’s shoulders and legs. Cinched with a buckled belt for added grunge, her look was finished with red patent leather gloves.

When it came to footwear, Cabello wore a pair of similarly textured black boots. The platform style featured rounded toes, thick soles and towering heels totaling at least 5 inches in height. Upon finishing their performance, the singer closed the the set — which included lyrical references to her breakup with Shawn Mendes, Instagram presence and split from Fifth Harmony — with an encouraging statement for Smith.

“Give it up for Willow, everybody!” Cabello proclaimed at the end of the song. You can watch their performance below:

Cabello’s final look came in a much more casual form. The singer stepped out to say “Good night” to the audience with Gyllenhaal and Smith at the episode’s end, wearing the same leggings and boots from her performance. Completing her look was a silver choker and oversized black T-shirt for additional comfort.

For footwear, the “Havana” singer regularly wears sneakers by Nike and Adidas, in addition to slides and sandals by Franco Sarto, Birkenstock and Steve Madden. However, her wallet-friendly shoe style often incorporates brands like Topshop, Candie’s and UrbanOG as well. Cabello often pairs these with dresses, tops and bottoms by affordable brands like H&M, Forever 21 and Zara, in addition to high-end labels like Dolce & Gabbana, Isabel Marant and Versace. Outside of fashion, she also serves as an ambassador for L’Oreal and has starred in campaigns for Guess, Candy’s and Skechers over the years.

Discover Cabello’s shoe style over the years in the gallery.