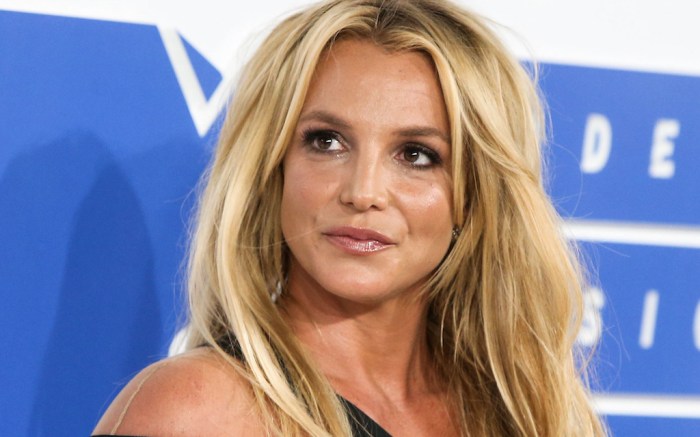 Britney Spears elevated casual-chic ensembles for a romantic trip with fiance Sam Asghari. The “Toxic” singer shared a series of sweet couples moments with Asghari in an Instagram Reel, including a car ride, dinner, dancing and a bath filled with roses.

While showing off their moves on the dance floor, Spears chose one of her go-to styles: a long-sleeved crop top. The piece featured an allover leopard print and backless silhouette for a risqué twist. Spears completed her look with dark skinny jeans, allowing the wild print to take center stage. For footwear, she opted for another go-to style: pointed-toe pumps. Though the material and color of Spears’ heels weren’t visible, the pair did feature the silhouette’s staple triangular toes and stiletto heels.

“Thank you baby for always reminding me what life is about … Joy, laughter, and living,” Spears sweetly captioned her video. “My experience was a woman’s dream.”

Asghari left Spears an equally romantic comment: “My life is a man’s dream.”

Pumps like Spears’ are a closet staple, able to bring instant sharpness to ensembles ranging from casual to formal. The most popular styles often feature neutral leather or suede uppers with stiletto heels, as seen in new pairs by Veronica Beard, Brother Vellies and Sam Edelman. In addition to the musician, stars like Zendaya, Halle Berry and Bella Hadid have also worn sleek pumps by Christian Louboutin, Le Silla and Burberry in recent weeks.

The style is now so synonymous with Spears’ wardrobe that she’s publicly clapped back at critics demanding she should buy new shoes. The statement came last week following criticism towards her “favorite” brown pair, which Spears frequently wears in her outfit videos. The singer also used the moment to clarify that she does, in fact, “have a lot of shoes.”

Spears’ footwear choices vary from sleek to bohemian. The “Seal It With A Kiss” singer often wears a range of styles while at home, including pointed-toe pumps and platform sandals from affordable brands like Steve Madden. Her off-duty wardrobe also includes Amaranti wedges, Ugg and Impo boots and Manolo Blahnik pumps. When previously on the red carpet, Spears’ sleek styles included pointed-toe, platform and thigh-high sandals from Louboutin, Stuart Weitzman, Jimmy Choo and Schutz.