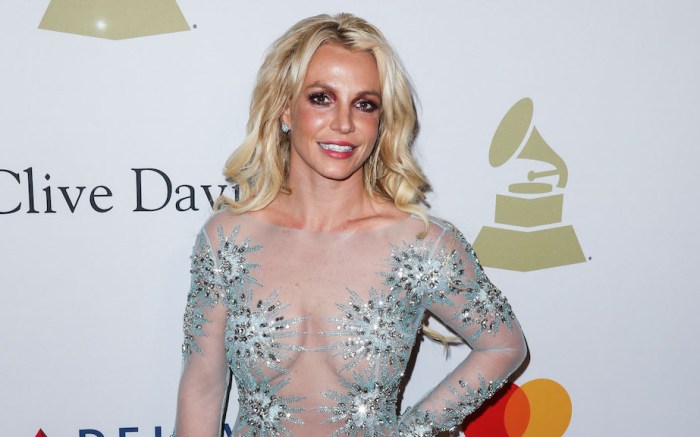 Britney Spears is ready for spring, thanks to a new set of outfits. The star brought a garden-worthy take to daytime dressing, as seen in her latest wardrobe haul.

Spears posed in a variety of outfits in a new Instagram Reel. The Grammy Award-winning musician’s main look consisted of a white and pink crop top, featuring puffed off-the-shoulder sleeves and a corset-like bodice topped with a bow. Spears completed her outfit with black low-rise jeans — a style she also wore during its original heyday in the early 2000’s. The jeans were paired with a second sheer floral top, featuring puffed sleeves and a high neckline. Spears’ final look — worn with brown platform sandals — consisted of a white and blue floral maxi dress with a front slit. All were accessorized with a blue Victorian-esque pendant necklace.

For footwear, Spears’ first two looks were completed with a pair of black pointed-toe boots. The versatile style appeared to feature ankle-length uppers, as well as stiletto heels totaling at least 3 inches in height.

In addition to the musician, stars like Vanessa Hudgens, Julianne Hough and Halsey have also stepped into sharp boots by Sophia Webster, Gia Borghini and Chanel in recent weeks.

Spears’ boots bore many similarities to her go-to pointed-toe pumps — which have become so synonymous with her wardrobe that she’s publicly clapped back at critics demanding she should buy new footwear. The statement came earlier this month, following criticism towards her “favorite” brown pair, which Spears frequently wears in her outfit videos. The singer also used the moment to clarify that she does, in fact, “have a lot of shoes.”

Spears’ footwear choices vary from sleek to bohemian. The “Seal It With A Kiss” singer often wears a range of styles while at home, including pointed-toe pumps and platform sandals from affordable brands like Steve Madden. Her off-duty wardrobe also includes Amaranti wedges, Ugg and Impo boots and Manolo Blahnik pumps. When previously on the red carpet, Spears’ sleek styles included pointed-toe, platform and thigh-high sandals from Louboutin, Stuart Weitzman, Jimmy Choo and Schutz.

Elevate your next look with black boots.