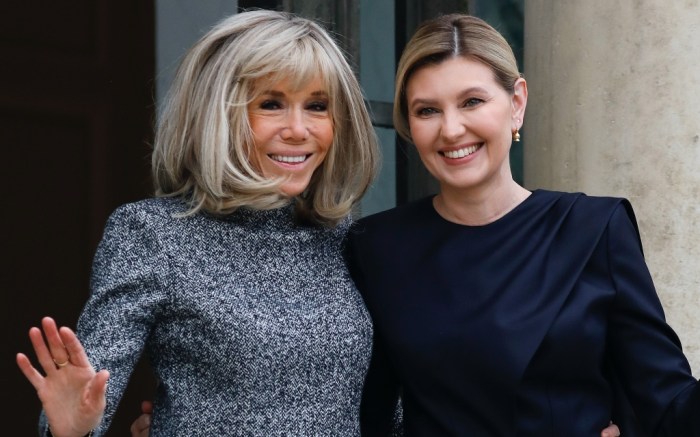 French first lady Brigitte Macron was sharply dressed to greet Ukraine’s first lady Olena Zelenska in Paris today. The duo met during a conference with state leaders, as well as 500 French companies, during a second conference set for Dec. 13 to begin planning for Ukraine’s post-war reconstruction.

For the occasion at the Elysee Palace, Macron was sharply dressed in a gray herringbone sweater and matching knee-length skirt, which was accented with gold buttons on each side. The knit set was layered atop matte black tights for a winter-worthy spin. Zelenska was also smoothly outfitted for the event in a silky black draped suit with sharp black pumps.

Grounding Macron’s look were coordinating ankle booties. The black set appeared to feature pointed toes, as well as suede uppers. The pair was complete with stiletto heels totaling at least 3 to 4 inches in height for a sharp height boost. The set remained versatile for season-long wear, while streamlining Macron’s ensemble with a neutral base that was classically timeless.

Brigitte’s minimalist wardrobe is regarded as a standard for the French-chic aesthetic. Most of the French first lady’s shoes are by Louis Vuitton, which is one of her go-to brands — she also counts Vuitton designer Nicolas Ghesquière as a close friend. Aside from ankle boots, she can also be seen in pointed-toe pumps and sporty sneakers in similarly chic colors. Brigitte often wears blazers, dresses and pantsuits, as well as skinny jeans and trousers, in sharp neutral tones. For formal occasions, she dons elegant dresses and gowns with minimal embellishments, with most ailing from French labels like Alaïa, Alexandre Vauthier and Dior.

PHOTOS: Discover Brigitte Macron’s style evolution over the years in the gallery.