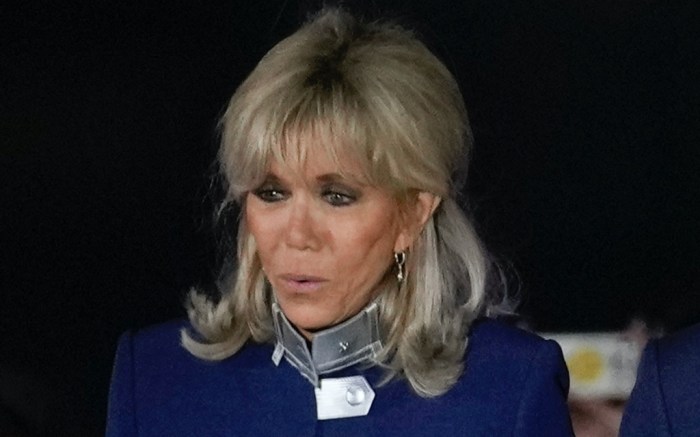 French first lady Brigitte Macron was sharply suited for the presidential election in France. In fact, she wore two ensembles for the occasion. And they proved to be lucky style choices as her husband, president Emmanuel Macron, won his re-election bid today.

While arriving to a polling station on Sunday morning in Le Touquet with Emmanuel Macron, Brigitte cast her ballot for France’s presidential election in a beige suit. The set featured slim-fitting trousers and a structured blazer, complete with pointed lapels. Macron’s ensemble was finished with a white blouse and a beige Louis Vuitton top-handle handbag with gold hardware.

Grounding her look was a set of coordinating suede pumps. The beige set featured pointed toes, as well as stiletto heels totaling 3-4 inches in height.

Later that evening, Macron switched into a second outfit to celebrate President Macron’s re-election with supporters in Paris. For the occasion, she wore a second suit with a sharp jacket and pants — this one in a deep blue hue. Completing this look was a military-style blazer with pointed eyelets and a tall silver collar. Macron finished this look with delicate earrings, while President Macron coordinated in a blue suit with a white shirt.

Though her footwear wasn’t visible, it’s likely Macron finished her ensemble with a similar pair of pointed-toe pumps, or — if the weather was colder — a pair of ankle boots in a coordinating dark tone.

Pointed-toe pumps are revered for their ability to streamline and sharpen any outfit. Pairs in neutral or tonal leathers or suedes with soaring stiletto heels are the most popular, and have emerged in new styles by Sam Edelman, M.Gemi and Sarah Flint in recent weeks. Aside from Macron, stars like Sofia Richie, Nina Dobrev and Lily James have also slipped on sharp Manolo Blahnik, Saint Laurent and Versace pumps for high-profile appearances.

Discover Macron’s style evolution over the years in the gallery.