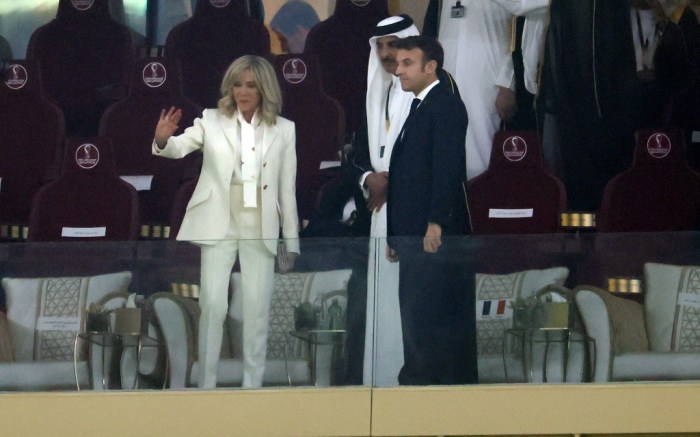 While watching Argentina and France face each other in the Cup’s final match at Lusail Stadium — where Argentinian soccer player Lionel Messi led his team to victory — Macron wore an all-white outfit. Her ensemble featured a double-breasted blazer with gold buttons and slim-fitting trousers.

The matching set was worn during the occasion with a knotted silky blouse by Macron, who attended the match with French President Emmanuel Macron and spoke with Sheikh Tamim bin Hamad Al Thani, Emir of Qatar during the event.

Macron completed her ensemble with a set of sharp white pumps. Appearing to feature leather uppers, her style included pointed triangular toes and thin 3 to 4-inch stiletto heels. The style created a head-to-toe monochrome moment, as well as providing Macron with a formally sharp height boost for the occasion.

Brigitte’s minimalist wardrobe is regarded as a standard for the French-chic aesthetic. Most of the French first lady’s shoes are by Louis Vuitton, which is one of her go-to brands — she also counts Vuitton designer Nicolas Ghesquière as a close friend. Aside from ankle boots, she can also be seen in pointed-toe pumps and sporty sneakers in similarly chic colors. Brigitte often wears blazers, dresses and pantsuits, as well as skinny jeans and trousers, in sharp neutral tones. For formal occasions, she dons elegant dresses and gowns with minimal embellishments, with most hailing from French labels like Alaïa, Alexandre Vauthier and Dior.