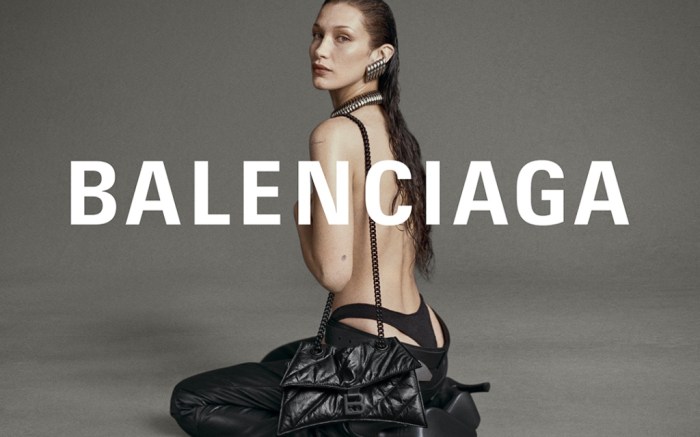 Bella Hadid went back to basics — with a sleek upgrade — for Balenciaga’s Fall 2022 campaign.

While posing in the newest collection by Demna, the supermodel posed while sitting down in a black thong. Adding an edgy layer to her outfit was a set of the brand’s most viral new footwear: boot pants, a merging of trousers or leggings with a heeled boot. Hadid’s set featured black leather trousers attached to boots with a 3-4-inch stiletto heel. Hadid’s topless ensemble was finished with a thick silver necklace and post earrings, as well as Balenciaga’s upcoming Crush Bag — a rectangular flap bag composed of puffy quilted leather.

When it comes to fashion, Bella Hadid’s chic style often combines grunge and early 2000s aesthetics for looks that mix vintage and luxury pieces. The Riccardo Tisci muse often wears sneakers by Adidas, New Balance and Nike, plus trendy shoes such as Yeezy Foam Runners. The model can also be spotted in sharp pointed-toe pumps and sandals on the red carpet, from top brands including Christian Louboutin, Fendi and Miu Miu.

Click through the gallery to see Hadid’s sleek style evolution over the years.