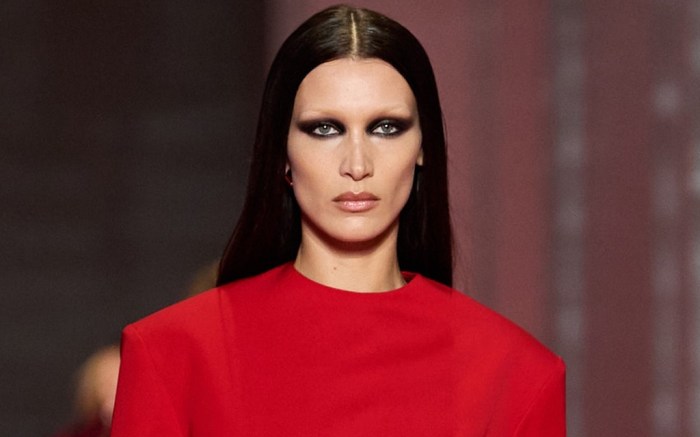 The Hadid sisters might just be the ultimate Versace girls. The sisters have made their mark on the Italian luxury brand over the years, most recently starring in its spring 2022 campaign and modeling in its edgy fall 2022 show. Need further proof? The duo posed with none other than Donatella Versace herself after the show during Milan Fashion Week.

While on a rooftop with a billboard backdrop of their spring campaign—which they star in together, along with Miss Versace—the sisters and the iconic designer posed together in slick style.

“Family,” Hadid captioned a sweet series of images, including Versace walking onto the rooftop and seeing the billboard herself.

The occasion came soon after the sisters walked in Versace’s fall 2022 show. The collection featured an array of sultry designs in red, pink, green and black palettes, including an array of corsets, bodycon dresses and sky-high platform pumps. Both sisters wore monochrome red outfits for the occasion, complete with towering heels.

Versace isn’t the only occasion the Hadid’s have shared a stylish sister moment on the runway. Over the years, the duo have strutted in the same fashion shows for brands like Michael Kors, Moschino, Jacquemus and Jean Paul Gaultier. And, of course, who could forget their iconic walk together on Anna Sui’s spring 2018 runway?

Gigi Hadid’s shoe choices typically veer on the casual side. The Maybelline muse frequently wears sneakers by Nike, Puma and Reebok, which she collaborated with on a capsule collection in 2018. Slides are one of her longtime favorites, which she’s worn from brands like Adidas, Ugg and Alexander Wang. However, Hadid’s also known for wearing show-stopping heels, especially pointed-toe pumps, boots, and strappy sandals by Stuart Weitzman, Christian Louboutin and Giuseppe Zanotti for formal occasions.

When it comes to fashion, Bella Hadid’s chic style often combines grunge and early 2000s aesthetics for looks that mix vintage and luxury pieces. The Riccardo Tisci muse often wears sneakers by Adidas, New Balance and Nike, plus trendy shoes such as Yeezy Foam Runners. The model can also be spotted in sharp pointed-toe pumps and sandals on the red carpet, from top brands including Christian Louboutin, Fendi and Miu Miu.