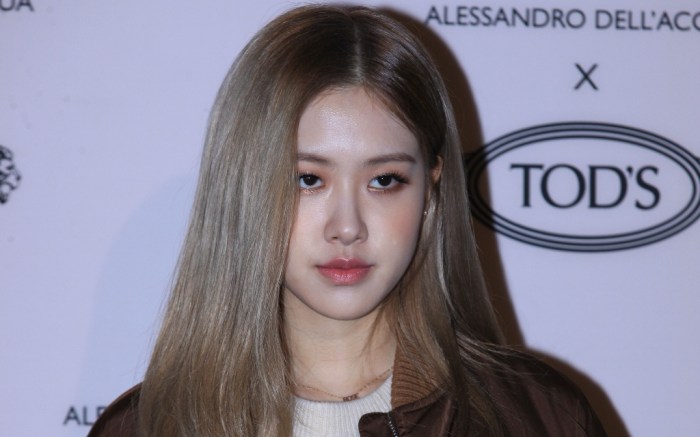 The “Pink Venom” musician posed on a blue ball on Instagram while behind-the-scenes of a new project, wearing a black cutout crop top and high-cut briefs. The set was layered under a fluffy green long-sleeved coat, which bore instant resemblance to the titular character in “How The Grinch Stole Christmas”; similar comparisons emerged last year when Kendall Jenner posed on vacation in a similarly fluffy green dress. Completing Rosé’s outfit was finished with chining rings, as well as a set of dark denim leg warmers that cinched at her knees and featured a flared silhouette with white netting underlay.

“A giant grinch or the little prince?” the singer captioned the photo dump.

For footwear, the “Whistle” singer’s ensemble was completed with chunky black sneakers, complete with exaggerated thick soles and mesh lace-up uppers. When paired with her leg warmers, the pair had the appearance of a set of sneaker-soled boots, adding to her outfit’s edgy effect.

This isn’t Rosé’s first bold fashion moment in recent weeks, either. At the 2022 Video Music Awards in August, the star wore a long-sleeved black Saint Laurent minidress with a large flower accent that came with its own draped front train, as well as sharp black pumps.

For footwear, the “Ddu-Du Ddu-Du” singer often wears slick sandals, pumps and boots by Saint Laurent, which she’s also a global brand ambassador for. During performances and music videos, Rosé can be seen in chunky boots and platforms from brands including Club Exx, Eytys and Dolls Kill. Off-duty, her casual looks often feature Adidas sneakers, as well as loafers and boots by Vetements and Dr. Martens. Aside from wearing stylish shoes, the singer is also a brand ambassador for Tiffany & Co.

PHOTOS: Click through the gallery to see Blackpink’s stylish looks over the years.