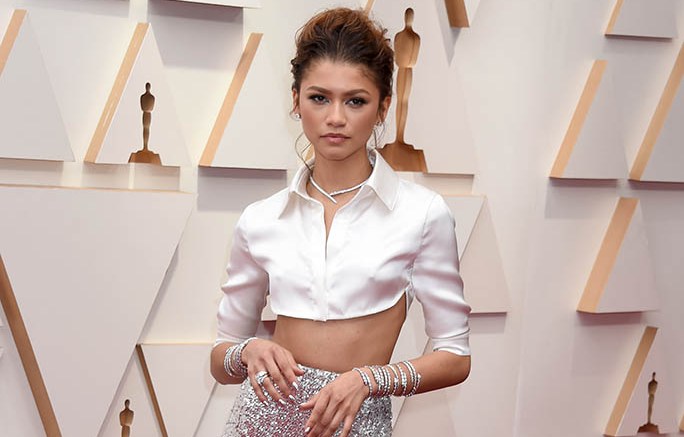 Zendaya made quite the statement today at the 2022 Oscars held at the Dolby Theater in Los Angeles. Hot off the heals of an incredible gown moment at a pre-Oscars 2022 party, she showed up at the awards ceremony in yet another show-stopping look. The “Euphoria” actress arrived on the red carpet in a white silk crop top. The garment included a sharp structured collar and a slit on the each side that helped to accentuate the waist.

To amp up the glamour, the Emmy Award winner teamed the casual top with a silver sequined skirt that had a long train. Stacks of Bulgari diamond serpent bracelets climbed her arm and a matching necklace and diamond stud earrings finished off the look. Zendaya and her stylist Law Roach possibly gave a subtle nod to Sharon Stone in a Gap white top and Valentino skirt at the Oscars in 1998.

The length of her skirt didn’t allow for a look at her shoes but she did choose high heels by Christian Louboutin, one of her go-to footwear labels.