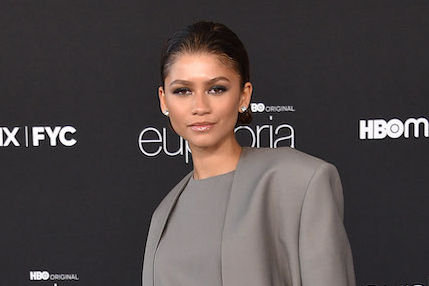 Zendaya proves that structured suiting will always remain in style. The “Shake It Up” alum posed on the black carpet for the “Euphoria” FYC event in Los Angeles at the Academy Museum of Motion Pictures last night while wearing a dashing look suitable for the fashion industry’s “it” girl.

The event reunited the entire cast if the drama, which recently wrapped its second season, including Sydney Sweeney, Maude Apatow, Alexa Demie, Hunter Schafer and Barbie Ferreira. Zendaya also posed alongside her longtime stylist and FN’s Style Influencer of the Year, Law Roach.

As for Zendaya’s outfit, she went with a chic monochromatic gray suit by Fear of God. The blazer had a flowy disposition juxtaposed with structured shoulders and a lapel-less design. Underneath, she went with a matching blouse tucked into high-waisted cropped trousers. The pants had pleats down the middle and a sharp hemline for a tidy finish.

The “Spider-Man: No Way Home” star opted for a pair of coordinating gray pumps. Christian Louboutin’s “So Kate” heels had a sharp pointed-toe design and had a height of approximately 4 inches for a modern and sleek touch.

Zendaya is known for her sophisticated and cutting-edge clothing tastes. For example, she donned a black shirt dress paired with sheer black tights and suede black pointed-toe Christina Louboutin pumps while out with her boyfriend Tom Holland in New York City for a chic yet casual ensemble.

As an actor and singer, Zendaya is a red carpet regular famous for her bold and unexpected style. Always chic and polished from head to toe, Zendaya has walked the red carpet in everything from voluminous floral gowns to menswear-inspired suits to daring looks. She released her Daya by Zendaya clothing and footwear line in 2016, which was recognized as the 2016 Launch of the Year at the FNAAs. In 2019, Zendaya released a two-season collaboration with Tommy Hilfiger. She’s also been the face of Valentino, Bulgari, Lancôme and Covergirl.

Put on a pair of gray pumps for a refined appearance.