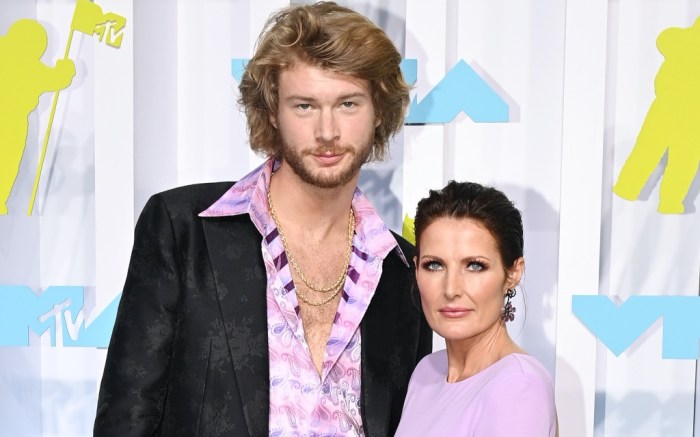 Yung Gravy and Sheri Easterling — AKA, Addison Rae’s mother — made a truly purple pair on Sunday at the 2022 MTV Video Music Awards in Newark, NJ.

During the occasion, Gravy virally referred to Easterling as “kind of the queen of MILFs” on the red carpet, according to Cosmopolitan.

When it came to footwear, Easterling’s ensemble was completed with an equally shiny set of purple Giuseppe Zanotti sandals. Her footwear included thin layered toe straps and curved counters, accented by ankle-wrapped buckled straps for added edge. Thin stiletto heels totaling at least 4 inches in height finished the pair, giving the TikTok influencer a sleek height boost in the process.

The 2022 MTV Video Music Awards were held on Aug. 28 at the Prudential Center in Newark, NJ, hosted by Nicki Minaj, Jack Harlow and LL Cool J. Minaj was notably recognized with the event’s Vanguard Award for her contributions to the music industry, while the Red Hot Chili Peppers were given the Global Icon Award. The 2022 Awards also included performances by Blackpink, Anitta, Panic! At the Disco, Lizzo and Maneskin. This year’s nominations are led by Harlow, Harry Styles and Doja Cat, tied with eight nominations each.