Worst Dressed Stars at MTV VMAs 2022, According to Twitter 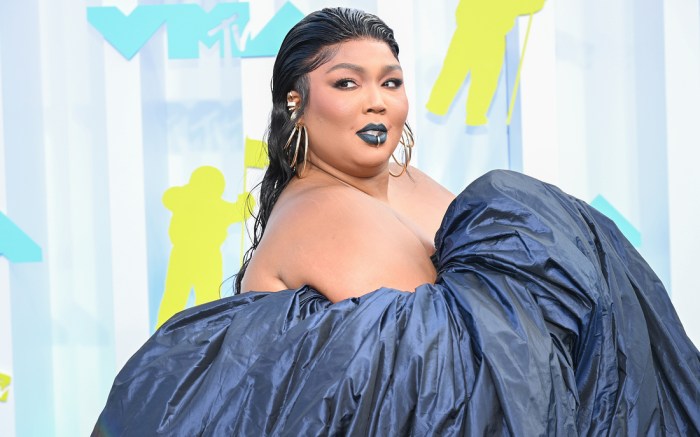 The 2022 MTV Video Music Awards certainly launched a new array of bold red carpet looks this year, live from Newark, New Jersey’s Prudential Center. Though some went viral for an array of positive reasons — with Taylor Swift’s crystal-trimmed Oscar de la Renta minidress arguably the night’s top fashion moment  — others weren’t as positive, whether due to an outfit’s color, shape or overall effect.

Below, we take a look at the worst fashion moments from the VMA’s, according to Twitter.

Lizzo took a dramatic approach to dressing for the Video Music Awards, arriving in a voluminous black and navy-toned Spring 2022 off-the-shoulder gown by Glenn Martens for Jean Paul Gaultier. Though she was celebrated for making a bold fashion statement, many on social media expressed confusion towards her couture outfit’s appearance. One Twitter user even stated the gown’s silhouette and ruching was similar to “garbage bags.”

Conan Gray arrived at the Video Music Awards in a voluminous white sheer lace jacket with a floor-length train, black pants, a thick choker and towering white platform boots. His daring look was critiqued online for its texture assortment. “Looks like my grandmother’s curtains f—— a doilie and they raised a dress together,” one user stated.

Arriving in a monochrome white suit, Offset gave the classic pieces a twist by wearing his suit jacket closed and with its collar turned up, accented by diamond floral brooches. However, the ensemble didn’t receive the warmest reception on social media. “Offset looks like he was playing dress up in his grandmas closet,” one user shared on Twitter.

Though two of Nicki Minaj’s 2022 VMA’s ensembles earned praise online — a pink satin gown and feather-printed dress, respectively — her third earned a wider range of reactions on social media. During a medley performance of her greatest hit songs to receive the Michael Jackson Video Vanguard award, Minaj rapped in a crystal-covered long-sleeved crop top, pink miniskirt, fishnet tights and heeled combat boots. However, the outfit was debated online, with users even deeming it “one of the worst outfits of her career.”