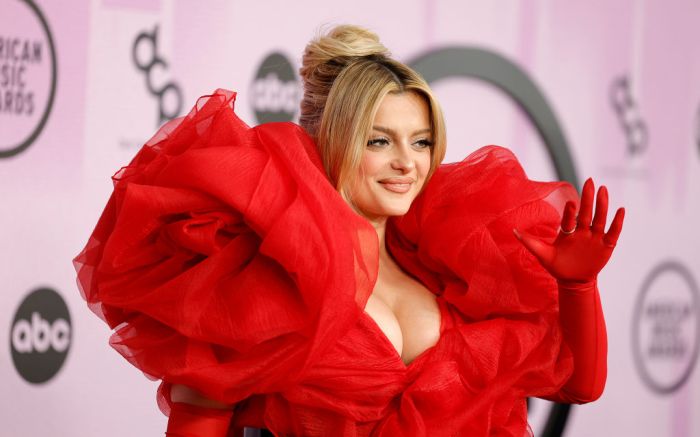 With a star-studded lineup of performers, attendees and honorees, the 2022 American Music Awards certainly made a statement. With that included a wide range of statement-making outfits — both the good and the bad.

At the Microsoft Theater in Los Angeles, musicians, influencers and more experimented with a range of textures, silhouettes and color to make a statement on the red carpet. However, some were greater misses than hits, whether from their simplicity, aesthetics or being just a little too over-the-top. Of course, Twitter users had a range of opinions and reactions to these ensembles, varying from improvements to comparisons from everything from movie characters to food.

Below, discover the worst-dressed stars at this year’s American Music Awards, according to Twitter.

Host Wayne Brady’s multicolored ensemble — one of many throughout the evening — featured a vibrant suit and matching hat in overlapping hues including red, yellow, green and blue. Twitter was quick to react, comparing the suit to a clown, hotel carpet and Skittles, among others.

Wayne Brady had a dream about Skittles before putting his outfit together for the American Music Awards.#AMAsFanFavorite #AMAs2022 #AMAs pic.twitter.com/hlb0t4Rhnt

Machine Gun Kelly’s spike-covered Dolce & Gabbana suit certainly made a dynamic statement on and off the red carpet. However, some believed it could harm his seatmate Lionel Richie from its long pin-like accents, even comparing the suit to the horror villain Pinhead from 1987’s “Hellraiser” and the Iron Throne from “Game of Thrones.”

Though Underwood’s musical performances and red carpet arrival gained fanfare from many users, her “Crazy Angels” performance outfit did not. The ensemble in question — which Underwood wore descending from trapeze hoops above the crowd, sparking comparisons to Pink — was a sparkling pink, white and blue paneled catsuit, which users saw as similar to cycling jerseys and ’80s cartoon “Gem and the Holograms.” One even stated it should have been paired with a skirt to make a dress silhouette, as well.

Carrie Underwood looks like she threw on a Gem's outfit that didn't come with shoes in the box 🧐 #AMAs pic.twitter.com/vLm2dDrVPf

Anitta had several outfit changes throughout the evening. However, her first ensemble — a custom Mugler gown with a sculpted metallic corset and tight white bodycon skirt — gained ire online from its fit. One user stated people knew she “was gonna eventually trip,” while another described it as “stiff and uncomfortable.”

Ugh! @Anitta outfit made her look so stiff and uncomfortable 🫠🫠🫠 @AMAs #AMAs

Musician Latto’s outfit while arriving to the Awards featured a black corseted bodysuit layered with a lengthy piece of tulle. However, users remained confused as to whether it qualified as a dress — with one even stating it looked like a diaper.

Coco Jones wore a black sculpted dress covered in a swirling white print for the Awards. However, despite its subtle hues, users still found the ensemble confusing. One even stated it looked like an “optical illusion.”

Bebe Rexha’s vibrant red Burlangma tulle dress, worn while arriving to the red carpet, certainly made a statement at the AMAs. However, its volume and color drew ire from Twitter. One user compared it to “Looney Tunes” character Gossamer, while another theorized she must have been “sweating lots” in the voluminous piece.