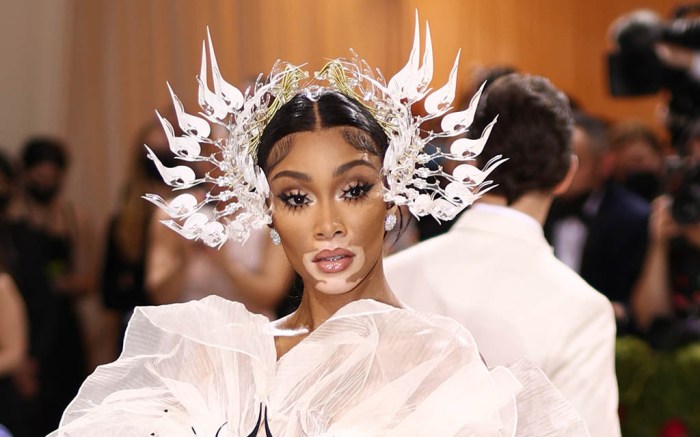 To attend the biggest night in fashion, Harlow wore a white mini dress by Dutch designer Iris Van Herpen, which was decorated with a massive white organza flower-like accent on the front and back. In the middle of the two embellishments was a large black tribal-inspired applique, which extended in tendrils like a branch across the front of the dress. It also featured clear spine-like 3D accents extending outward for an avant-garde look. For footwear, the star wore simple close-toed white slingback stiletto heels with feminine bow detailing at the back.

But the standout portion was a gorgeous headpiece crafted by Van Herpen, who is known for his opulent and experimental headwear. The artistic headpiece featured glass and gold detailing, white flame-like accents and clear gemstones. The headpiece mimicked the spine-like look of the dress, but also recalled the look of an elegant candelabra, thanks to the flamed accents. Harlow wore her hair elegantly pulled back in an “S”-style updo to let the wearable art piece shine.

According to the brand, Harlow wore more than $1 million worth of diamonds from Wempe. To reach that mind-boggling total, the model wore gorgeous intricate diamond studs, several statement diamond rings and delicate diamond bracelets.

For her glam, Harlow kept things relatively simple to let the rest of her look shine. The model wore a shimmery eye look featuring statement lashes with a glossy nude lip.