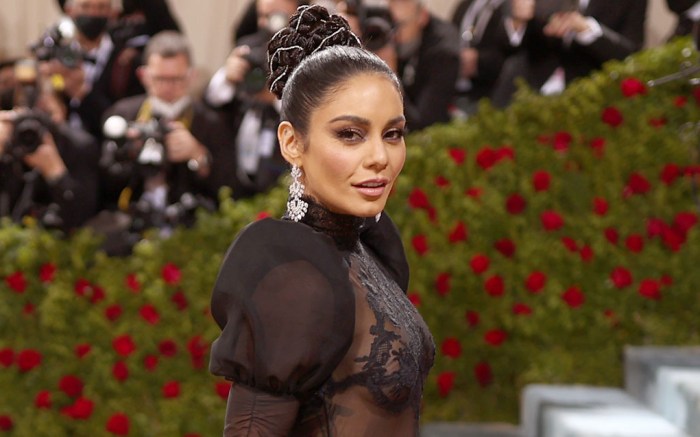 Vanessa Hudgens had all eyes on her when she arrived at the Met Gala in New York celebrating the opening of “In America: An Anthology of Fashion” exhibition today. The singer and actress is set to host Vogue’s 2022 Met Gala red carpet livestream alongside Vogue’s editor-at-large Hamish Bowles and Lala Anthony. The evening event will stream across Instagram, Facebook, Twitter and Vogue’s digital platform tonight at 6 p.m. ET.

Hudgens stepped out in a black gown by Moschino. The see-through number was complete with puffy satin sleeves, floral details on the bust and a long dramatic train. The details of her dress didn’t stop there. The “High School Musical” alum teamed the sheer frock with lace undergarments and diamond chandelier earrings and a chunky studded bracelet.

To amp up the glam factor, the “Bad Boys For Life” actress swapped her curly tresses for a romantic top knot bun. As for footwear, Hudgens rounded out her look with black open-toe platform sandals by Jimmy Choo. The brand’s “Maxi” style features a 6-inch stiletto heel.

Hudgens was seen earlier posing for photos at the Mark Hotel she departed for the big event.