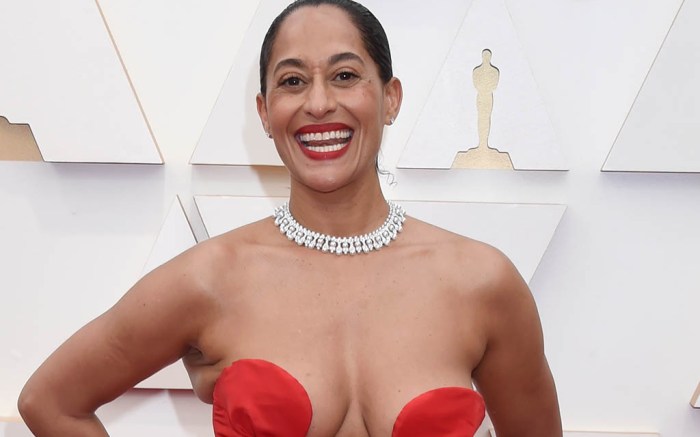 Tracee Ellis Ross popped at the 2022 Oscars at the Dolby Theater in Los Angeles — with heels to match.

The “Blackish” star hit the red carpet in a strapless red gown by Carolina Herrera. Featuring a plunging neckline with a structured rounded bodice, as well as a midi-length skirt with a tiered ruffle, Ross’ ensemble was both elegant and daring. Completing her look were dazzling diamond stud earrings and a bold collar necklace.

When it came to shoes, Ross’ footwear of choice came from one of her go-to brands: Christian Louboutin. The star slipped on a pair of red satin Pigalle Follies, which featured triangular pointed toes and soft uppers. Her style was complete with stiletto heels totaling 4 inches in height — giving her look a sleek height boost and aesthetic finish. The monochrome high heels also matched her dress perfectly, literally allowing Ross to embody the notion of “red carpet glamour.”