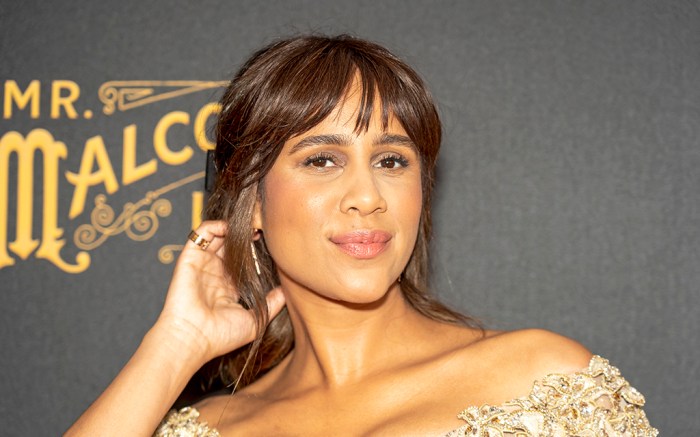 Tom Hiddleston and Zawe Ashton are going to be parents. The actress and soon-to-be mom subtly shared the couple’s exciting news with her elegant sartorial selection while attending a New York City film screening on June 29. Vogue also confirmed the star’s pregnancy in a behind-the-scenes photo essay of Ashton getting ready before the event.

The 37-year-old actress indirectly “announced” her pregnancy by simply attending a film screening of her latest project “Mr. Malcolm’s List.” For the screening of the period drama, Ashton wore a couture gold tulle gown by Sabina Bilenko, which featured silver beaded accents, shining crystals, and floral appliques. The off-the-shoulder caped gown featured a floor-grazing hem, which mostly hid the star’s footwear choice. However, in some photos from the night, a beige glitter pointed-toe pump can be seen barely sticking out from the hem of her gown.

Ashton wore her locks pulled back in a half-up, half-down hairstyle, which accentuated her wispy bangs. Wearing a minimal glowing makeup look, the star wore three-prong statement earrings as her only jewelry.

It’s not clear how long Ashton has been pregnant with the couple’s first child.

Hiddleston and Ashton met back in 2019 while both starring in the Broadway play “Betrayal.” The extremely private couple made their first red carpet appearance together at the Tony Awards back in September 2021. Hiddleston and Ashton subtly announced their engagement back in March when Ashton wore her engagement ring to the 2022 BAFTA Awards, an understated move that echoes her recent indirect pregnancy “announcement.”