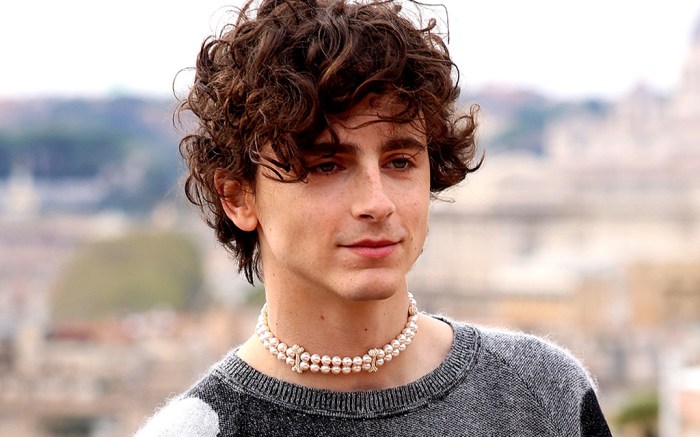 Timothée Chalamet attended the “Bones and All” photocall at Hotel De La Ville in Rome today. The charming star rolling up to the photo op with shades on in an edgy Vivienne Westwood sweatshirt and black leather footwear.

The fashionable thespian’s look was comprised of a black and white heart crew neck with fitted glossy leather trousers that made for a grungy addition that played into his grungy appearance. Chalamet strung a pearl bone choker around his neck, a Westwood staple, and wore Cartier rings to match.

When it came to shoes, the “Call Me By Your Name” star’s footwear was instantly streamlined from a pair of black leather boots. The style featured black uppers with almond-shaped toes and glossy patent sheen. The style was complete with flat soles and short heels, proving Chalamet’s rebellious nature on the red carpet by opting to stick with his go-to style instead of dress shoes.

Chalamet is a fashion chameleon, often wearing looks that feature streamlined silhouettes and monochrome styling with bursts of prints, colors and textures. The “Beautiful Boy” actor makes statements in bold looks from top labels like Stella McCartney, Alexander McQueen, Prada, and Haider Ackermann — to name just a few — as well as cult-favorite brands like Sterling Ruby.

Directed by Luca Guadagnino, “Bones And All” is a drama and romance film that follows Maren Yearly, played by Taylor Russel, and Lee, played by Timothée Chalamet, as they navigate their painful pasts while kindling a blossoming relationship as they embark on a 3,000-mile odyssey through the backroads of America. The film is set to release Nov. 23, 2022.