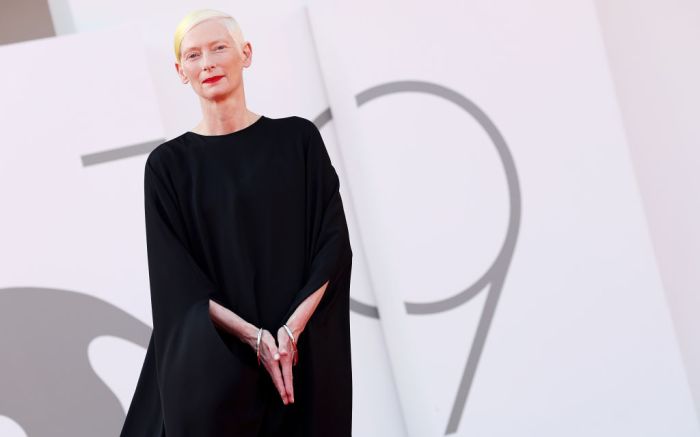 Tilda Swinton had a standout arrival at the premiere of “Saint Omer” at the Venice Film Festival.

The actress attended the film’s debut in a flowing Alaïa silk dress with a scoop neckline, cutout sleeves, and attached silver bracelets. Swinton’s look paired with leather Alaïa mules of the same hue, in-line her outfit’s monochromatism and entailed a similar braceleted element on each shoe. Her look featured a minimalistic approach as she opted for a jewelry-less style outside her dress and shoes’ fused accessory compositions.

Swinton wore her hair in a bright yellow style, also seen at the premiere of “The Eternal Daughter,” the film she stars in, directed by Joanna Hogg, and its accompanying jury photocall the same day. The neon look was colored and cut by Josh Wood and Nicholas Hardwick, respectively, with assistance from Bryony Cairns and Chiara Alongi.

Wood took to Instagram to share the inspiration behind her hairstyle and working with the star. “Tilda Swinton looking truly sensational at the premiere of The Eternal Daughter today at the Venice Film Festival,” Wood captioned with three yellow heart emojis. “It is always such an inspiration to work with Tilda. There is one thing for sure, the colour is never dull. Creating a bespoke hair colour with Tilda and Haider was a joy and the pinnacle of creativity. This hi vis yellow is not for the faint-hearted, but does demonstrate how one can express themselves through hair color.”

The Venice Film Festival recognizes some of the world’s most highly anticipated films. The annual gathering unveils the works of established and emerging international filmmakers at the Palazzo del Cinema di Venezia in Italy. Films such as “Blonde,” directed by Andrew Dominik and starring Ana de Armas and Adrien Brody, and director Noah Baumbach’s “White Noise,” starring Adam Driver and Greta Gerwig, are among the screenings. Actress Julianne Moore is this year’s jury president, along with Mariano Cohn, Audrey Diwan, Leila Hatami, Kazuo Ishiguro, and Rodrigo Sorogoyen as jury members. The festival runs from Aug. 31 through Sept. 10.