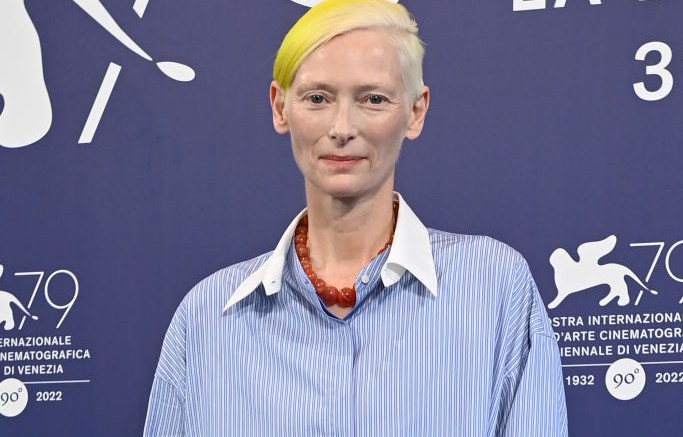 Tilda Swinton hit the star-studded red carpet of the 79th Venice International Film Festival in Venice, Italy on Sept. 6 for the premiere of a movie she stars in, “The Eternal Daughter.” Keeping casual, Swinton wore a slouchy outfit from Loewe, which she paired with comfortable flats.

The attire began with a blue and white striped oversized button down with a crisp collar and cuffed sleeves. “The French Dispatch” actress paired the long sleeve top with red slacks with an equally large silhouette featuring stripes going down each side. Repping more red, the British star wore a chunky stone necklace that acted as a stand-out piece within the look.

Swinton’s once all-white blond locks were painted neon yellow on top further adding to the drama that the already vibrant color-scheme provided.

The 61-year-old wore shiny ruby red ballet flats, successfully opting out of wearing heels this time around. Ballet flats were especially popular in the noughties, though it has stayed in fashion over the decades for its versatility of wear.

“The Eternal Daughter” is a ghost story from acclaimed filmmaker Joanna Hogg starring Tilda Swinton and Joseph Mydell. The story follows a middle-aged daughter and her elderly mother as they confront long-buried secrets when they return to their former family home, a once-grand manor that has become a nearly vacant hotel brimming with mystery.

With her neon yellow hair now styled up, Swinton took to the red carpet again today, this time alongside her co-stars, in a purple iridescent long sleeve Haider Ackermann gown. The sparkling maxi-style dress featured a short but dramatic train that trailed behind the Oscar-winner when she walked. Going bold, Swinton wore oversized gold rings which she paired effortlessly with eye-catching blue and purple duo-chrome pointed pumps that were barely visible under the hem of her gown’s skirt.