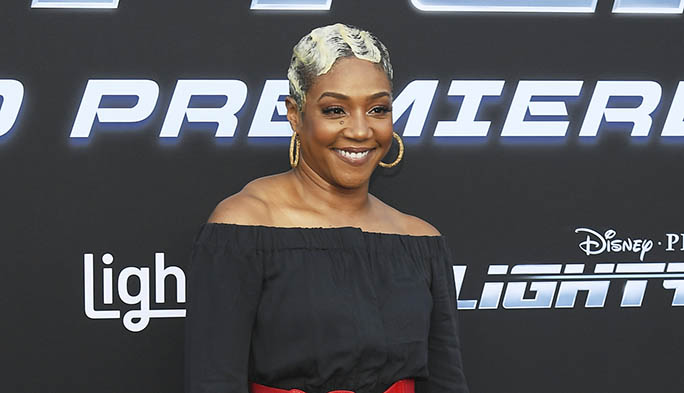 Tiffany Haddish made a sleek style statement at the Los Angeles premiere of Disney Pixar’s “Lightyear” held at the El Captain Theatre on Wednesday night. The “Toy Story” spinoff follows Buzz Lightyear as he embarks on an intergalactic adventure with a group of ambitious recruits and his robot companion. Chris Evans and Keke Palmer also star in the film, which officially hits theaters on June 17.

Haddish wore a black off-the-shoulder jumpsuit to the star-studded affair. The garment was complete with long breezy sleeves, ruched detailing on the chest and balloon pants. The Emmy Award-winning comedian added standout accessories to the ensemble including, yellow gold hoop earrings and a bright red belt that wrapped tightly around her waist and held the jumpsuit together.

For glam, she slicked her platinum blond pixie down and added soft makeup with a neutral glossy pout. The “Girls Trip” actress flattered her look with red strappy sandals. The striking shoe style featured a crisscross strap on the instep and sat atop a thin stiletto heel. Heeled sandals are a sleek staple during the warmer months. Many silhouettes feature a simple strap across the toes and a faster strap around the ankle, creating a barely-there construction.

Haddish’s clothing aesthetic aligns with her eccentric and eclectic taste. For red carpet events, she’s all about over the top fashion statements. She frequents in gowns from Christian Siriano, Azeeza Official and Prabal Gurung. As for footwear, the “Night School” actress tends to gravitate towards heeled sandals, sharp pumps and a variety of boots.

Click through the gallery to see Haddish’s breakout style statements.