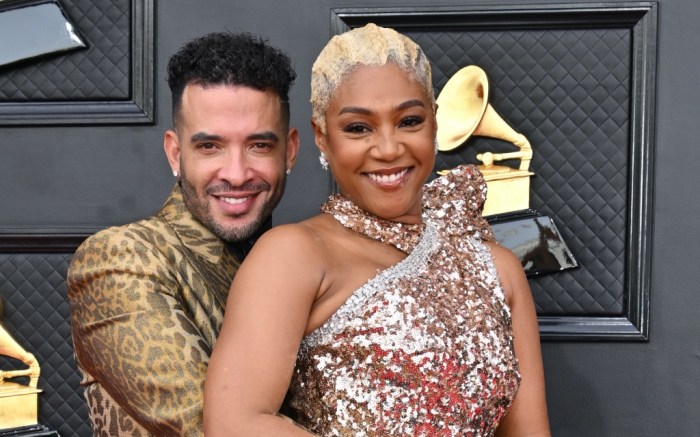 Tiffany Haddish turned heads on the red carpet. The comedian attended the 2022 Grammy Awards in Las Vegas on Sunday night.

Though she has previously won a Grammy in 2021 for Best Comedy Album, Haddish was attending this year as a guest. She posed on the red carpet with “Hollywood Unlocked’s” Jason Lee. To the star-studded event, Haddish wore a stunning gold sequin gown, custom made by Prada. The dress included one shoulder with a large bow embellishment. She added oversized jewels to the look, including a necklace and bracelet.

Lee wore a leopard print suit with black patent shoes to the event.

While Haddish’s shoes were hidden by her dress, she likely wore a beautiful pair of heels. She has been known in the past to hit formal events in styles from the likes of Versace, Alexander McQueen, Christian Siriano and Oscar de la Renta to name a few.

Click here to see more of the red carpet appearances from the 2022 Grammy Awards.