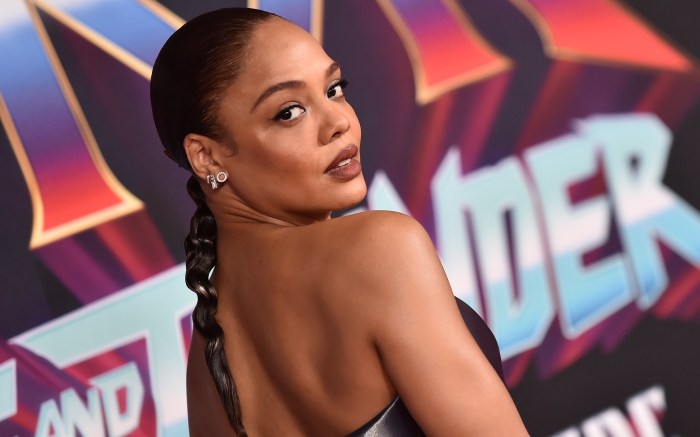 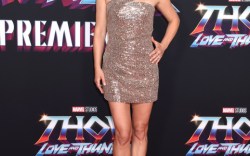 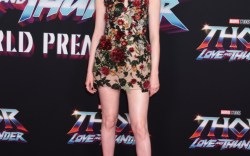 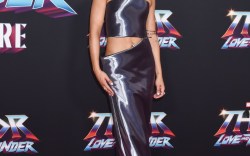 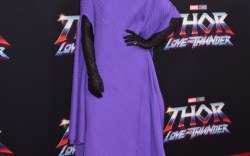 Tessa Thompson is surely on-theme with her astronomical attire. For the “Thor: Love and Thunder” film premiere on June 23, the attire called for something a bit more thunderous and out of this world. Some of the actors played with color, the “Sorry to Bother You” actress chose to play with cut and fabric.

Her sleeveless Armani Prive dress highlighted a shimmer that reflected across the whole garment, a reflective material that made the black dress look gray. The design of the dress almost took a 3D-like shape, as it was a square cut around her bust and torso, but then created a cutout across her waist, the second half of the garment attaching in an asymmetrical hem.

The dress was sleek and was fitted as the ends draped just perfectly around her heels. The accessories were kept to a subtle degree, as there was no need for anything too dramatic as the dress made its own moment. Instead, she sported two rings on her left hand and an arm cuff that played against the gown very well.

The makeup fawned a sultriness, as her eyes sparkled from mascara and a glittery shadow that panned well with her nude lips. A bit of sultriness to contrast the edgy heels she brought to the carpet.

To bring some spunk to the red carpet, the “Creed” actress went for something even bolder. A pair of black platform heels to get the party started. These heels debuted a strap across the toe and a skinny heel. Even though the gown draped over them, the times of which they were shown, they held their own prized moments. Usually, a smaller heel like a pointy toe pump would go with a dress like this but Thompson’s switch-up was needed to keep the paparazzi out of focus.