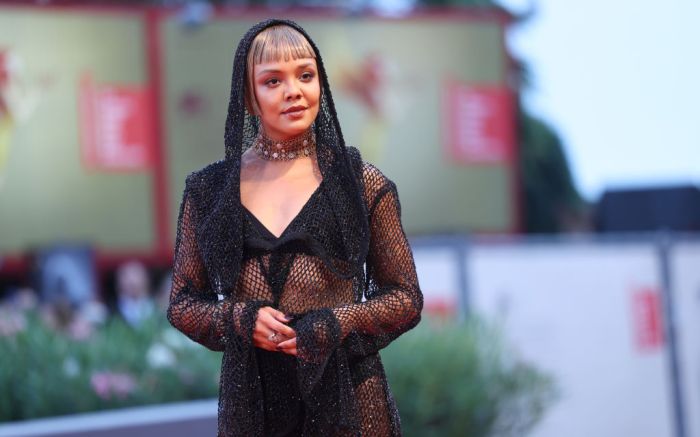 Tessa Thompson served up drama on the red carpet for the premiere of “Blonde” at the 79th Venice International Film Festival in Venice, Italy today. Shrouded in bluish black, Thompson was joined by the cast of the film, towering over them in platforms.

The “Thor: Love and Thunder” actress wore an unexpected mesh hooded dress dotted with sequins and fitted with a train that had the thespian shining bright all night long. Underneath the dazzling dress Thompson wore a bra and high waisted undergarments that offered her extra coverage when needed. Styling blunt blond bangs, Thompson accentuated her features with graphic brows and a deep purple glossy lip.

“Blonde” is an upcoming psychological biography film written and directed by Andrew Dominik which will premiere at the festival. Adapted from the 2000 biographical fiction novel of the same name, the film is an exaggerated take on the life of famed actress Marilyn Monroe. The film is scheduled to be released in the United States on September 16, before its streaming release on Sept. 28, on Netflix.

PHOTOS: See how other celebrities styled sky-high heels at the 2021 Met Gala.