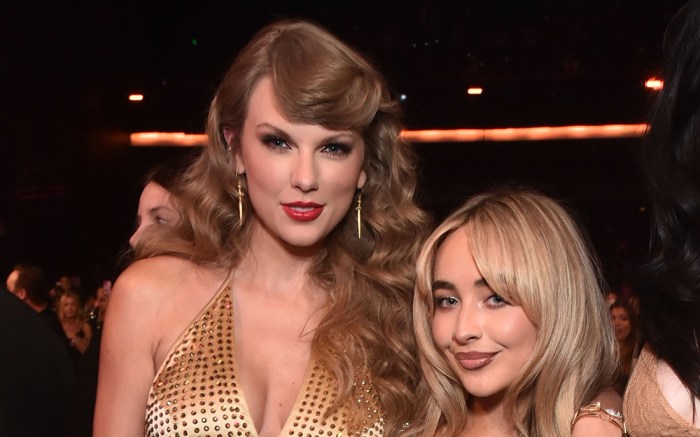 Carpenter hugged Swift onstage — a moment where Swift also patted her head before accepting the Favorite Music Video trophy for “All Too Well: The Short Film” at the Awards. The height difference between them — Swift is 5-feet-10 and Carpenter is 5-feet tall — made their encounter go viral on social media.

Swift, meanwhile, similarly sparkled in a sleeveless halter-neck jumpsuit coated in gold crystals. The ensemble, hailing from The Blonds, featured a cinched belt with long legs and a deep neckline. The piece, aside from creating a light-catching moment with Carpenter, also seemingly served as an Easter egg for fans; many instantly drew similarities to the sparkly gold Reem Acra gown Swift wore at the Awards in 2011, as well as her gold Julien Macdonald minidress from the 2015 ceremony.

Fittingly, her outfit was finished with gleaming gold stiletto-heeled sandals by Giuseppe Zanotti, worn while also accepting trophies for Artist of the Year, Favorite Pop Female Artist and Favorite Pop Album — marking Swift as the most-awarded artist in the American Music Awards’ history.

The AMAs honored the year’s top achievements in the music industry — and claims the honor of being the largest fan-voted awards show in the world. The 2022 ceremony, hosted by Wayne Brady on Nov. 20 in Los Angeles, featured performances by Carrie Underwood, Imagine Dragons, David Guetta and Anitta. The evening also included a musical tribute to Lionel Richie — winner of the event’s 2022 Icon Award — by Charlie Puth, Stevie Wonder and Ari Lennox, as well as a performance by Pink in honor of the late Olivia Newton-John.