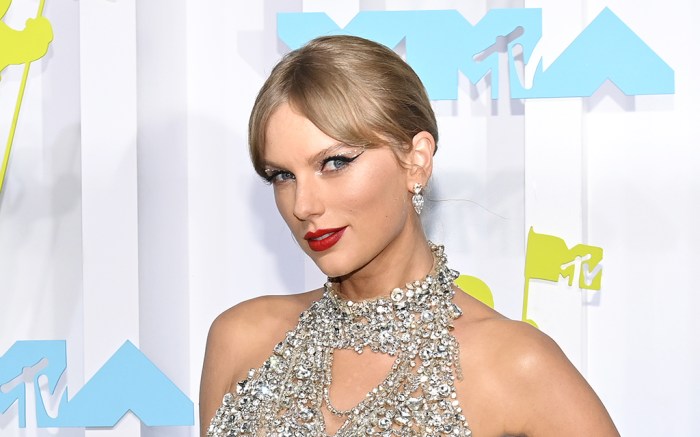 Taylor Swift glistened upon her red carpet arrival at the 2022 MTV VMAs tonight in New Jersey. Wearing Oscar de la Renta, Swift dazzled fans in a high-neck mini dress, the star making an impressive entrance to the awards. Set on an opaque nude base, crystals were strung in a random pattern, crisscrossing every which way and overlapping to create a chaotic but beautiful drape that certainly grabbed attention.

The delicate dress was accessorized accordingly with sparkling dangly studs and a variety of gold chunky rings. The multi-genre singer-songwriter brought the bling up to her lids, bedazzling them with crystal appliqués in geometric shapes that she paired with her black winged liner and red lip combo. Swift wore her blond hair parted in the middle in a tight but low updo, keeping her straight strands out of her face.

The “Cats” actress kept the gleam going on her feet, stepping into shiny strappy heels decorated in more crystals that hung off each intersecting strap. The silver sandals featured rounded toes and red stiletto heels, the eye-catching addition making the 5-foot-10 musician even taller.

The “Folklore” songstress is nominated for five MTV VMAs this year, all for her cinematic “All Too Well” short film: Video of the Year, Best Long-Form Video, Best Cinematography, Best Direction and Best Editing.