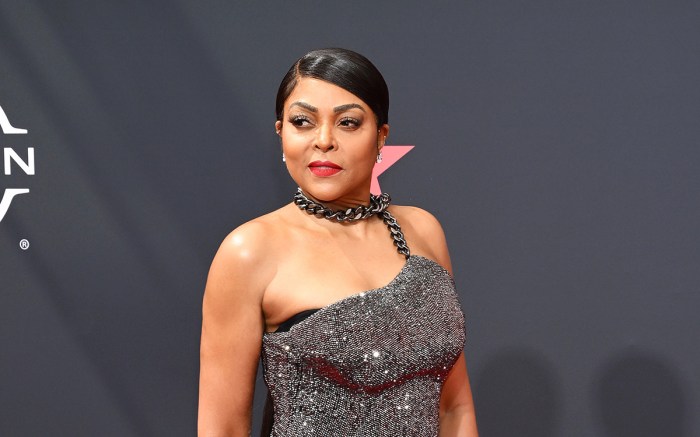 View Gallery 91 Images
Taraji P Henson arrived on the red carpet for the BET Awards on Sunday in Los Angeles in sparkling style.
The “Empire” star twirled for the cameras, showing off the intense sparkle of her dress. The Tom Ford gown was covered in silver sparkles all set on gray fabric, the shimmer gleaming under the cameras flash. The dress had an asymmetrical top with a chain rope trailing up the shoulder like a strap, securing around her neck and down her back.
The silver gown also had a slit running up the side, which helped show off the actress’s bold shoes. The peep-toe disco platform heels gave Henson a massive boost in height. The heels were strappy, securing to the actress’s ankles with multiple layered black straps.
The star strutted in the black platforms, easily walking the length of the red carpet in the fancy footwear. Henson wore dainty silver jewelry to match the glittering gown and finished the outfit off with a chic but lengthy slicked-back ponytail hanging down her back.
The BET Awards celebrate the achievements of musicians, actors, athletes, and more throughout various entertainment fields. The first BET Awards took place in 2001 to celebrate Black culture and Black excellence. Taraji P. Henson is the host of this year’s show with performances by Lizzo, Latto, and Jack Harlow. Leading nominations include Doja Cat with six nods, Ari Lennox, and Drake with four nods each.