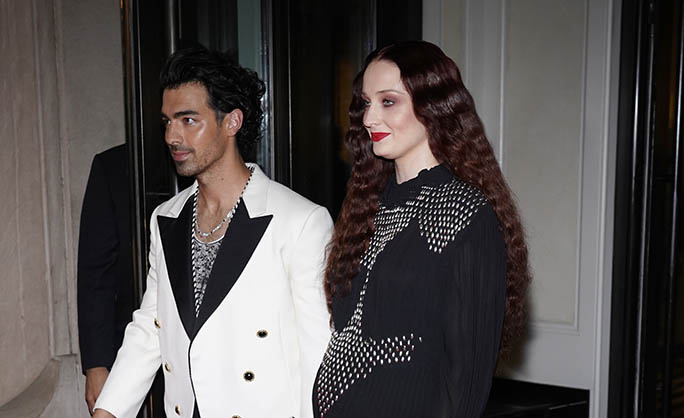 Sophie Turner and Joe Jonas made a striking departure from The Mark Hotel and made their way to the 2022 Met Gala in New York City today. The celebrity couple stylishly stepped out for fashion’s biggest night.

Turner, who is expecting her second child with the musician, stepped out in a long-sleeve black gown. The sleek number was complete with a mock neckline, silver embellishments on the bodice and near the shoulders, ruched detailing on the sleeves and a modest train.

The English actress opted for minimal accessories but amped up the glamour with bold makeup. Turner complemented her ensemble with a pink smokey eye, rosy blush on her cheeks and a vibrant red matte lip. The “Game of Thrones” alum parted her red tresses in the middle and styled her hair in crimpy waves. When it came down to footwear, Turner slipped into a pair of black platform slides. The shoe style had a wide strap and chunky round outer sole.

Jonas coordinated with his wife and donned a white tuxedo jacket that had a long lace cape attached at the back. The pop star teamed his suit jacket with a grey shirt, black pants and leather boots.