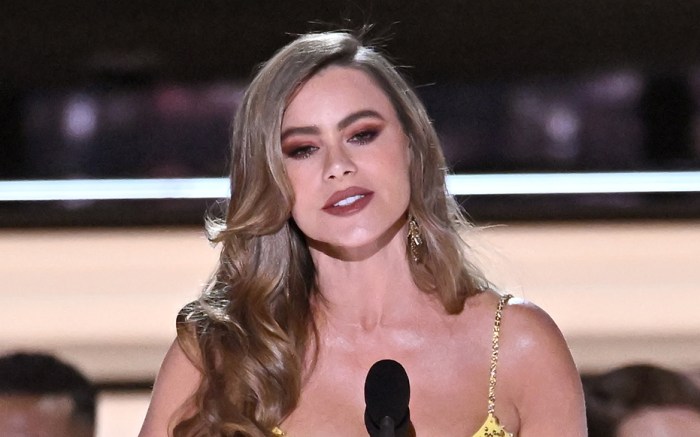 Sofia Vergara graced the gold carpet at the 74th Annual Primetime Emmy Awards held at the Microsoft Theater in Los Angeles tonight clad in an eye-catching gown and hidden heels. The Colombian actress is up for an award for her long-running stint as a judge on “America’s Got Talent.”

The star presented the award for Outstanding Supporting Actor in a Drama Series dressed in bright yellow, Vergara’s fitted floor-length dress was dotted with a sheer overlay of sparkling gold and clear beads fitted with a risky plunging neckline and even shiner gilded straps.

The thespian accessorized sparingly, adorning her fingers and ears with silver and gold jewelry. Vergara’s voluminous brown hair was parted to one side, styled in swooping curls and her makeup was made up of warm browns.

While Vergara’s shoes were hidden under the extensive hem of her gown, it’s safe to say she was wearing some sort of platform sandal heel, her go to shoes. Aside from stiletto and block-heeled styles, her rotation also includes trendy Gia Borghini mules, See by Chloé boots and Puma sneakers. Vergara’s made soaring heeled platform pumps and sandals her go-to’s over the years, often from top designers like Christian Louboutin, Saint Laurent and Gianvito Rossi.

Vergara is also a fashion mainstay, tapped by Dolce & Gabbana as a brand ambassador and campaign star for its coveted Devotion handbag. The actress also has her own line of apparel available at Walmart, as well as a Foster Grant eyewear collection.

PHOTOS: See what other celebrities wore to the 2022 Emmy Awards.