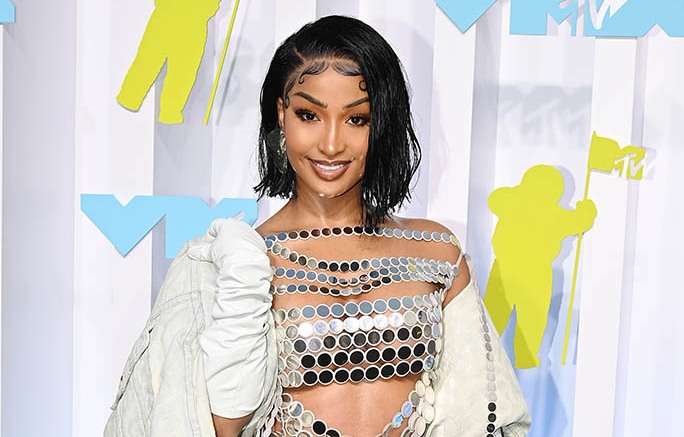 Celebrities have turned the 2022 MTV Video Music Awards black carpet into their own personal runway. The annual ceremony kicked off at the Prudential Center in Newark, NJ tonight and celebrates the best music videos of the past year and features unforgettable performances, tributes and appearances from the biggest stars in music.

Shenseea was among the A-list bunch to make a grand arrival. The Jamaican dancehall artist pulled out a show-stopping ensemble by Marc Jacobs for the occasion. Shenseea took a futuristic approach to red carpet glamour appearing in a silver sequin bralette top that had chain draped detailing on the bust and bodice.

The “Blessed” singer teamed the striking top with a floor-length skirt that gave the illusion of denim due to its distressed hem. Shenseea added an edge to the outfit with baggy ruffled sleeves and a denim jacket, which she let hang from her shoulder.

To take her look up a notch, the entertainer went with soft eyeshadow and glossy neutral pout. Shenseea styled her hair in a bob and parted it on the side.

When it came down to the shoes, the “Good Comfort” hitmaker completed her look with a pair of white platform Mary Jane heels. The shoe style had a stacked chunky outsole and massive 6-inch block heel.