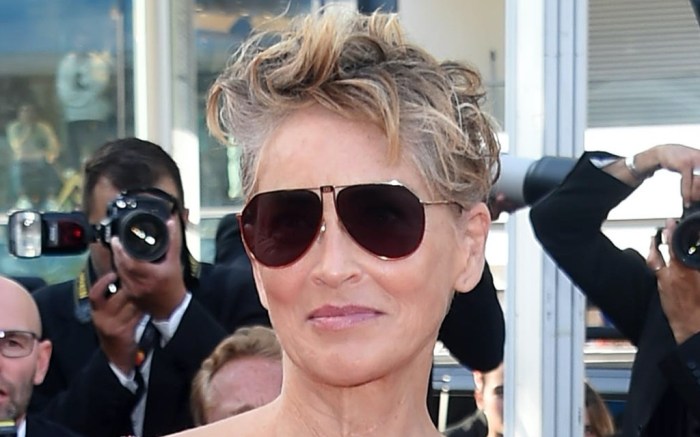 Sharon Stone went bold for the Cannes Film Festival premiere of Baz Luhrmann’s “Elvis” — with a cleverly shady twist. The Emmy Award-winning actress was one of numerous stars attending the occasion, including Shakira, Kylie Minogue, Kaia Gerber and Olivia Culpo.

Arriving on the red carpet, the 64-year-old posed in a sleek red Dolce and Gabbana gown. The slim-fitting column included allover sequins to create slinky glitz, with matching straps. Covering the straps and encrusting the dress’ sweetheart neckline were an array of red and silver crystals, adding a burst of princess-worthy glamour. Completing Stone’s look was a matching leather clutch, covered in matching crystals and featuring a metal D&G heart logo.

For a truly effortless finish, Stone topped off her look with sleek aviator sunglasses. Featuring shiny gold frames and black lenses, Stone’s pair added a casual element fo her look that was both utterly nonchalant and tongue-in-cheek. After all, what better way to protect oneself from camera flashes — or sunlight — at an outdoor movie premiere in the south of France?

When it came to shoes, Stone boosted her look with a set of matching platform sandals. Creating a monochrome moment, the punchy set featured red satin uppers with closed counters, toe and ankle straps. Completing the pair were thin platform soles and stiletto heels that totaled 4-5 inches, adding a soaring height boost to Stone’s ensemble.