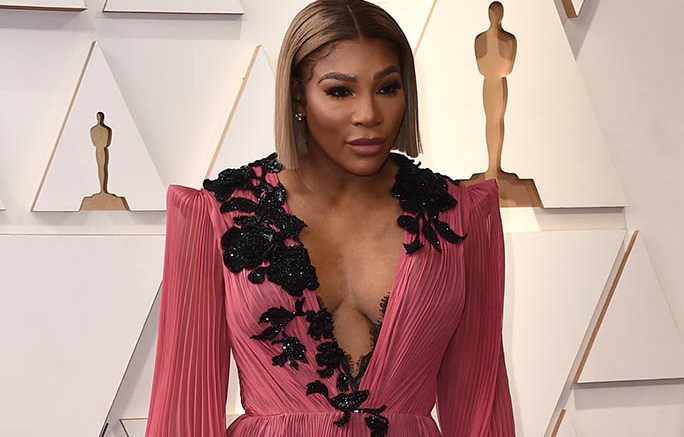 Serena Williams pulled out a show-stopping ensemble for the 2022 Oscars tonight in Los Angeles. Serena and her sister Venus Williams attended to support the cast of “King Richard.” The tennis champions, who were portrayed in the Academy Award-nominated film by Demi Singleton and Saniyya Sidney, had the honor of opening the show by introducing Beyoncé’s performance of “Be Alive.”

Williams, who works with stylist Jason Bolden, looked incredible in a custom plunging accordion-style pink Gucci gown with black floral detailing on the bust and shoulders. The garment also included a modest train and was complemented with delicate black lace gloves and diamond rings. She styled her blunt cut blond bob straight and opted for soft sultry makeup.

For shoes, who posed alongside her husband Alexis Ohanian, the Nike athlete elevated her dress with black platform sandals. The leather silhouette featured an open toe, thin ankle strap and high wedge heel.