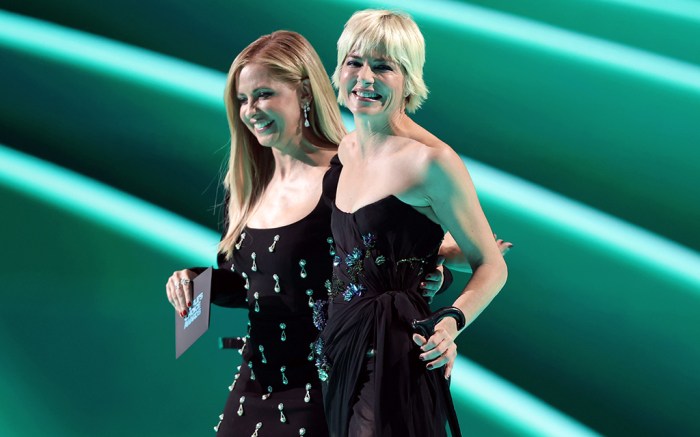 Selma Blair graced the stage alongside Sarah Michelle Gellar at the 2022 People’s Choice Awards held in Santa Monica, Calif. tonight. The “Legally Blond” actress was awarded the Competition Contestant of 2022 for her work on “Dancing with the Stars.”

The actress was up against Charli D’Amelio, who was also featured on “Dancing with the Stars,” and Teyana Taylor, who was part of “The Masked Singer” this year.

Blair’s onstage ensemble consisted of a strapless black Oscar de la Renta dress with a sweetheart neckline. The silhouette was embellished with blooming 3D floral details made of an iridescent blue crystalized material all along the waistline.

The gown also featured a leg-climbing side slit that diversified the silhouette of the garment. As for her hair, the 50-year-old star showed off a silver-blond pixie cut.

The star’s shoes weren’t visible, but she likely slipped on pumps to complete her outfit.

In addition to the reality show competition, Blair recently celebrated landing a new Gap campaign as part of the brand’s Icons campaign, where she starred alongside Labrinth, Cameron Russell, Lucky Blue Smith, and Toni Breidinger. For Blair, this was a full circle moment, as she worked at a Gap store on the Upper East Side in New York when she first moved to the Big Apple to pursue acting as she revealed in her book “Mean Baby.”