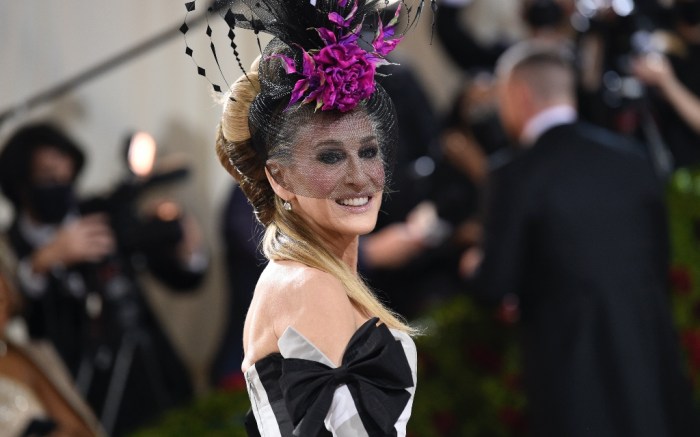 And just like that, Sarah Jessica Parker has returned to the Met. The “Sex and the City” star arrived in statement-making fashion, specifically for the 2022 Met Gala’s red carpet tonight in New York.

The “And Just Like That” star made an elegant entrance in a sweeping gown by Christopher John Rogers. Her look, which included a bustled skirt with a cinched waistline, was inspired by an 1860s dress from designer Elizabeth Hobbs Keckley — who was also the first Black female fashion designer in the White House. Giving her “In America” look added depth and whimsy was an enlarged two-tone stripe print in black, gray and white tones.

Parker’s ensemble was notably topped by an elaborate Philip Tracey headpiece — a staple in her formal Met Gala outfits as far back as 2009, when she wore a massive mohawk to the punk rock-themed exhibit. This year’s featured a large magenta rose atop a spray of black feathers and tulle, complete with a matching veil that encircled her face.

Though her footwear wasn’t visible, Parker was wearing shoes of her design — SJP Collection. The silhouette was likely a pump or sandal, two of her go-to silhouettes, as well as the evening’s most popular styles so far. The star has also worn similar shoes on previous red carpets, making them likely go-tos for the evening as well. Parker notably teased her look on Instagram while getting ready for the Gala beforehand, captioning a trio of photos “Dateline New York City. 5:41pm. First Monday in May. Met prep 2022.”