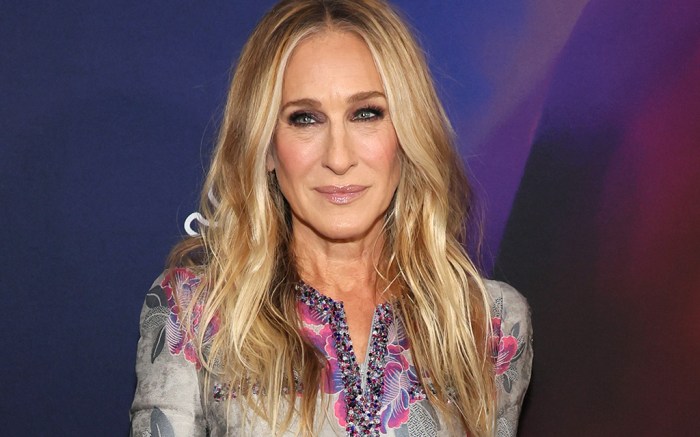 Sarah Jessica Parker attended the premiere of “Hocus Pocus 2,” the beloved classic’s reboot getting many to brush their brooms off and get witchy just in time for Halloween. The premiere, which took place at the AMC Lincoln Square Theater in New York yesterday, saw the former “Sex And The City” star chicly dressed in a blooming Armani Privé set, along with vibrant footwear.

An undeniable style icon, Parker showed out in a teal long sleeve mandarin top with a high neck, the garment featuring florals in bright pink fading into a gradient of a lush purple. Every hem of the top was decorated with beads in a multitude of colors that resembled confetti, offering the ensemble textural and visual interest. For bottoms, the SJP by Sarah Jessica Parker owner sported satin finish pale pink capri style pants with legs that ballooned out, tapering and coming to a close with cuffed hems.

Opting for even more color, the 57-year-old popped on pink pointed pumps with a glossy satin-like finish much like her pants. Parker is a certified expert when it comes to shoes. Bold colors, along with shining embellishments, make up a majority of Parker’s footwear choice. From platforms to pointed toe pumps, it seems there’s nothing that Parker can’t pull off.

“Hocus Pocus 2” will be available to stream on Disney+ starting on Friday, Sept. 30. The film, directed by Anne Fletcher and written by Jen D’Angelo, is a sequel to the Halloween classic released in 1993. Bette Midler, Sarah Jessica Parker and Kathy Najimy are reprising their roles as the Sanderson sisters. “Hocus Pocus 2” also added Tony Hale, Sam Richardson, Hannah Waddingham, Whitney Peak, and Lilia Buckingham to the cast.

PHOTOS: See some of Sarah Jessica Parker’s most beautiful shoe looks over the years.