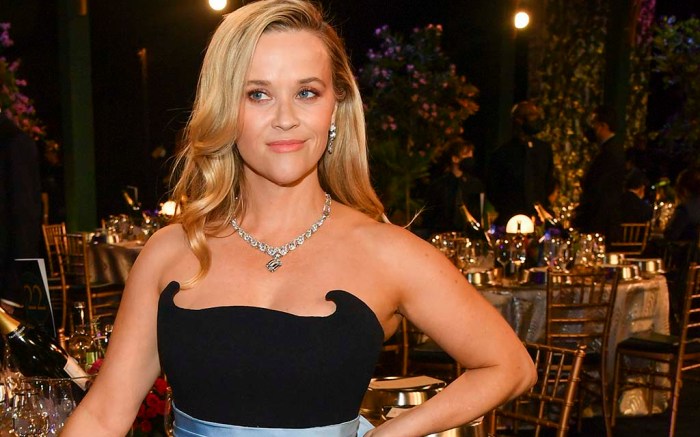 Reese Witherspoon brought a surrealist take to her razor-sharp red carpet style for the 2022 SAG Awards on Sunday night in Santa Monica, Calif. The actress is nominated for two trophies for her work on the second season of Apple TV’s “The Morning Show”: Outstanding Ensemble in a Drama Series and Outstanding Performance by a Female Actor in a Drama Series.

While stepping out for the awards, the “Legally Blonde” star pose in a black midi-length dress by Schiaparelli. The Daniel Roseberry-designed number featured a strapless silhouette with a swirl-shaped neckline, as well as a pale blue silk sash that flowed into a dramatic train. For added glamour, Witherspoon’s look was paired with a sparkling Cartier diamond necklace and drop earrings, plus a Tyler Ellis clutch.

When it came to shoes, the “Little Fires Everywhere” star tapped Jimmy Choo for a classic set of black pumps. The star’s satin style featured a pointed-toe silhouette, as well as stiletto heels totaling at least 4 inches in height. The pair instantly streamlined her formal look, while also proving versatile for outfits worn on or off the red carpet.